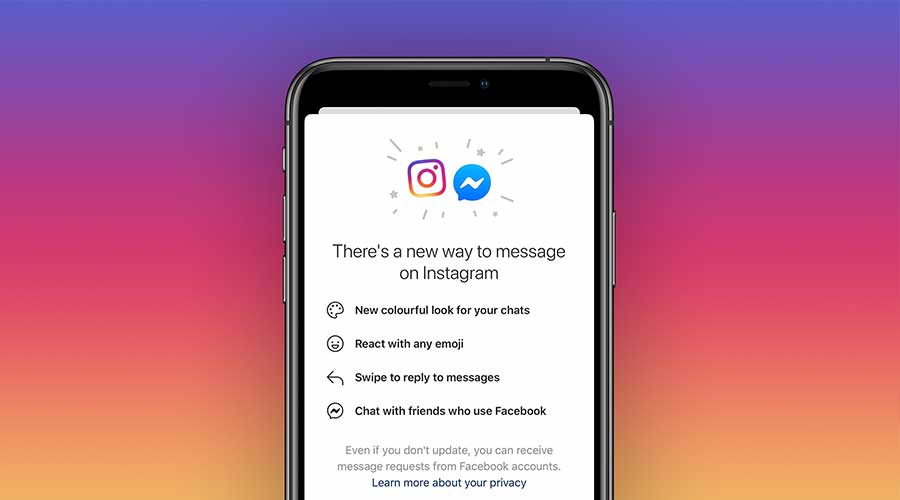 Facebook seems to be turning the switch towards integrating the chatting system of Instagram and Facebook Messenger. In a recent update to its Instagram app a message pops up onto the screen which says, ”There’s a New Way to Message on Instagram”.

In addition to its updated application, there is a new colorful look of chats, more emoji reactions to better interact, swipe function for reply and the main feature is chat with those friends who use Facebook application.

Chatting with friends on Instagram platform is certainly more interesting than before as messages turned purple from blue while scrolling down. Although at the moment it’s still not possible to send messages from one platform to the other.

Nevertheless, Facebook made clear their intention towards merging the entire messaging platforms of its massively popular applications to permit cross messages between WhatsApp, Messenger and Instagram.

According to Facebook, it’s renovating the fundamental structure so that the users who only used one of its apps can be able to send messages to other platforms as well. The founder and CEO of Facebook Mark Zuckerberg wanted to create an end to end encryption for its entire user. Through integrating the chats of Instagram, Whatsapp and Messenger apps, Facebook can finally compete with Apple iMessage service.

Facebook eliminates its competitor one by one through purchasing. Back in 2012 Facebook acquired Instagram in $1 billion deal and 2 years later Facebook purchased the biggest messaging service platform WhatsApp for $19 billion. Recently Facebook also bought Giphy for $400 million. This was Facebook’s fifth-largest acquisition ever made.