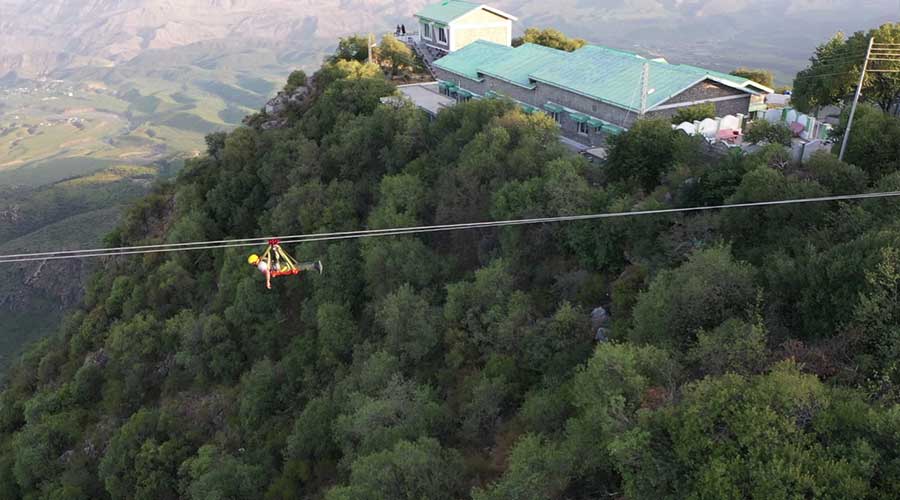 Sky Bridge Zipline in Cherat said to be South Asia’s longest zipline is yet another reason why you should travel to the adventurous northern areas of Pakistan.

The weather conditions are changing and after five months of Covid restrictions, the country has returned to normalcy. The tourism sector has been reopened and tourists are heading in flocks to the beautiful areas of Khyber Pakhtunkhwa and Gilgit Baltistan.

Now is the time to go north and find some new places for adventure. The government is also making new policies and formed a central tourism coordination committee regarding elevating the tourism department in Pakistan. Many new picnic spots are been opened and new plans are made to introduce adventurous entertainment to travelers.

A new tourist spot set up in the Khyber Pakhtunkhwa is garnering attention from all over the places. In the Cherat hill station of the province, Sky Bridge company launched a new exciting and adventurous Zipline which is claimed to be South Asia’s longest zipline.

According to the officials; Muhammad Islam Khan Assistant Director (INF) to Chief Secretary KP, on his Twitter account @Kamunicationist said, “Sky Bridge Zipline is SouthAsia’s Longest Zipline, located at the ridge line of Khattak Range overlooking the wild forest of Cherat, picturesque view of Maroba valley to the east and a glimpse of Saleh Khana – Jallozai to the west. It’s the longest zipline in south asia.”

Sky Bridge Zipline is #SouthAsia‘s Longest Zipline, located at the ridge line of Khattak Range overlooking the wild forest of Cherat, picturesque view of Maroba valley to the east and a glimpse of Saleh Khana – Jallozai to the west. It’s the longest zipline in south asia i.e pic.twitter.com/3aKcnd6uxo

Furthermore, the longest zipline is 1.6 km long and unique in its design. In addition to this, the Assistant Director also stated that “Being two sided zipline as the rider comes back to its first position after the second hop. Max Speed 75-80 kms/hr. Height 600 feet”.

Please Note: Appointment can be booked through only reference by military personnel (if you are a civilian) as it is inside Cherat Cantt.
The Zipline ticket is Rs. 2,000/person.

The total duration of the zipline will be around 2 minutes and 40 seconds and you will cover 1.6km with a speed of 75-80 km/h.