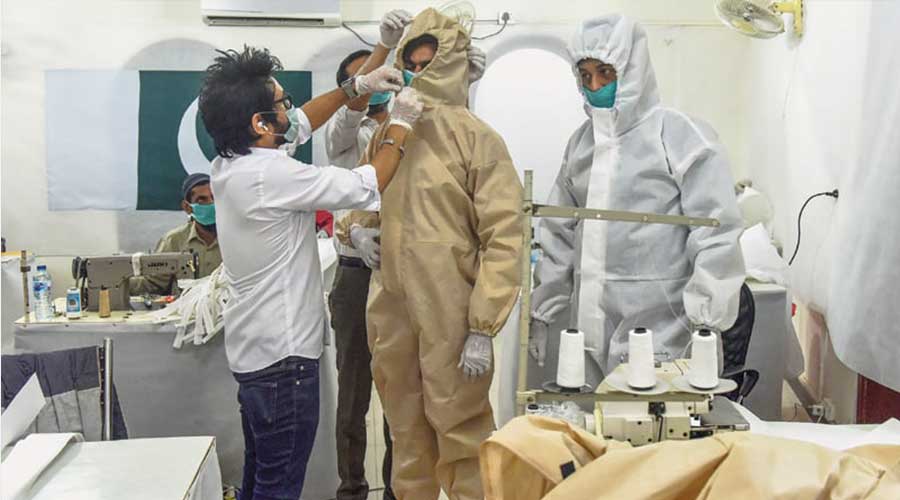 Alhamdolillah I have been appointed an advisor for the quality control of PPE by Sindh Minister of health Dr @AzraPechuho for the whole province.I am thankful for the opportunity & will do my best in fulfilling this task FOC.@SindhHealthDpt pic.twitter.com/RFPyKSxqEg

Sindh health department said in a letter directed to Jofa that it appreciated his “contribution towards participation in providing Personal Protective Equipment for our healthcare worker, who are working as the first line of defense in our fight against COVID-19 in Sindh”.

For the first time in Pakistan, PPE is being produced under the #AsimJofaCares initiative. The famous fashion and jewelry designer took the initiative in view of the pandemic crisis. After his initiative, other fashion designers also began to address this acute storage of PPE.

2020 has been the most disturbing year when no designer launched their special collection and so there were no trending outfits to set the fashion industry ablaze, the only trendiest outfit of 2020 is a hazmat suit and the most sought after taffeta fabric.

Read more: Pakistan’s top designers are gearing up for a virtual fashion show

Asim Jofa was asked about his PPE initiative on which he answered, “This is the finest achievement of my life. I have never done anything like this before.”

He further told that he got this idea in mind after he read an article where doctors in Spain were using garbage bags due to a chronic shortage of personal protective equipment. “It was alarming! If this could happen in Spain, how much worse would the situation be in Pakistan?”

He also told that he prepared his first prototype and presented it to Dr. Seemin Jamali, ED at the Jinnah Postgraduate Medical Centre but it got rejected. Then Doctor guided him to follow the instructions to prepare PPE after which another was approved. This received the green signal for him to continue.

After the acceptance of the prototype, he prepared more suits and supplied more than 3,000 pieces to many hospitals and NGOs throughout the country and especially to Hyderabad, Khuzdar, Lahore, Peshawar, Faisalabad, Islamabad, Karachi, Quetta, and Bahawalpur.

He further said, “I am enjoying what I am doing. As a hyperactive person, I found it difficult to adjust to the lockdown; being idle made me bored and depressed. Now that I am working with a purpose, I am fine. I never know what’s next. Today I am into clothing, tomorrow I may quit and start something new from scratch.”