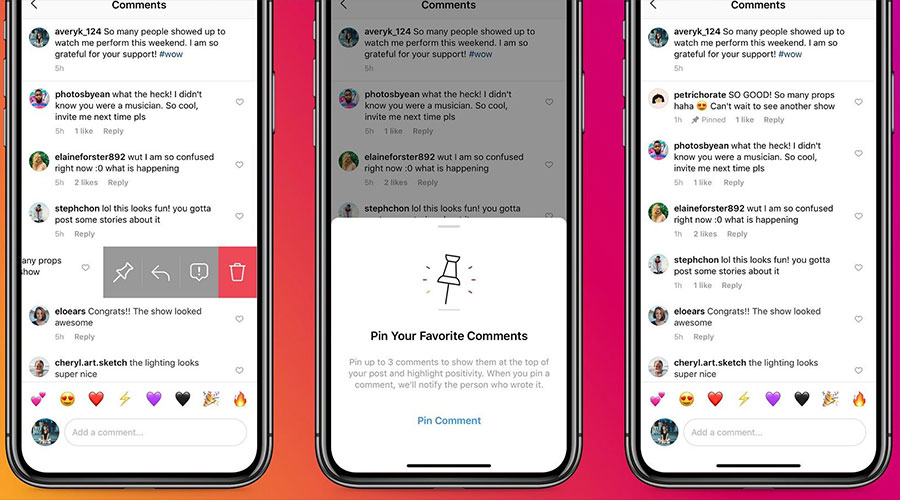 Instagram started the testing of pinned comments feature in your posts back in May and now the company has officially rolled out this feature for all users.

Vice President of Instagram Vishal Shah announced the latest feature of Instagram on Twitter in which he said that now users of IG can pin down their top three comments in the comments thread on post.

Along with the pinned comments feature Instagram also added other features including bulk delete of unwanted comments option along with who can tag and mention you in a particular post.

The pinned comment and bulk delete features are to help reduce the harassment and victimization that goes on the picture sharing application.

Get the latest version of the Instagram application from Google Play Store and go to the comments section. Just swipe left on the comment you want to pin to the top and press the thumbtack icon.

If you do not want a comment featured at the top spot then simply unpin it by swiping left and pressing thumbtack icon again. You will receive a notification, reminding you about the limit if you try to use pin features more than three times.

You can pin up to three comments. The Instagram pinned comments will appear under the picture with a pinned label on it.

While you pin down someone’s comments remember they will receive a notification, so it’s up to you which comment you pin.

Furthermore, with the addition of pinned comment, it will encourage Instagram users to share something valuable so that it gets pinned and people gain something from it rather than bullying or harassing someone.

Instagram is an American photo and video sharing platform created back in 2010 and now owned by Facebook and with its unique filters collection, it attracted celebrities to use the social networking site.