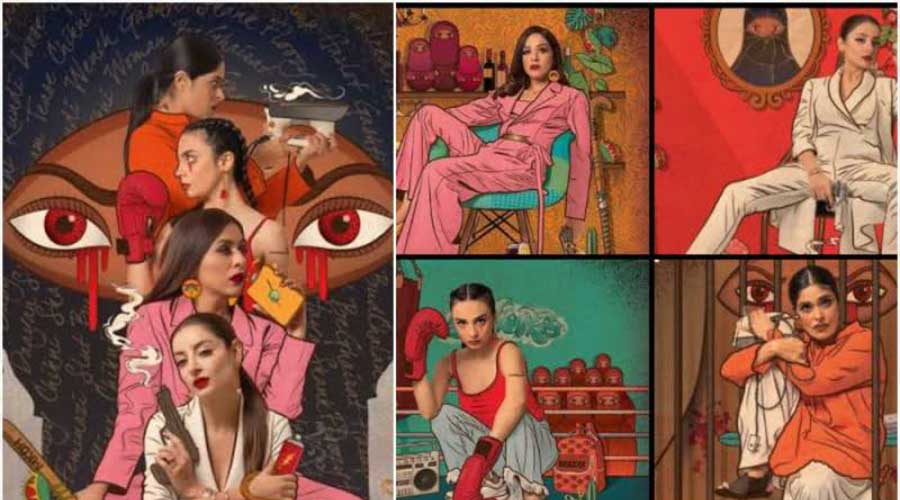 Hit TV series Churails has been removed for Pakistan viewers from Zee5 Global after dozens of social media users demanded the series to be banned over a viral clip from the series.

The show, which premiered in August on ZEE5 global has earned rave reviews for its strong female voice and has been directed by Asim Abbasi.

The series was wholly related to child abuse, forced marriages, deplorable labor conditions, the domination of race and class-leading to suicide and crime, as well as internalized misogyny and society’s collective obsession with a fair complexion, and all the harsh realities of Pakistan that leads into a regressive society.

However, Churails has now been removed for viewers accessing the Zee5 platform in Pakistan over a clip from the series that went viral on Twitter.

The viral clip features one of the characters, Sherry, played by veteran actor Hina Khawaja Hayat, talking about a sexual act and how she had to give sexual favours to get a job. The clip has been termed ‘vulgar’ by many on social media.

Asim Abbasi took to twitter and wrote, “How strange for Churails to be lauded internationally and now be shut down in its country of origin. In the very country where hundreds of artists came together to create something that could initiate dialogue and open doors for new narratives.”

He further wrote, “Artistic freedom squashed because it is wrongly perceived by some as a moral threat. Predictable, and yet, still disappointing. For this is not just my loss. This is a loss for women and marginalized communities that this show meant to re-represent.”

He went on to write on Twitter, “This is a loss for all actors, writers, directors and technicians across Pakistan, who were hoping for digital/OTT to be their savior. And it’s a home-run for all the misogynists who have once again proven that they are the only voice that matters.”

But Pakistan celebrities are giving their full support to the director of Churails, as Zindagi Gulzar Hai actress Sanam Saeed posted on twitter and supported him, “Banning dancing ads, outspoken films and webseries will not end rape if that’s the agenda. Why are we riddled with such hypocrisy? Buss bandh darvaazon kay peechay ho sub. God forbid hamari bholi awaam influence na ho jai if we take creative liberty to be honest and open.”

Zhalay Sarhadi posted, “With regards to #churails it is shame that our moral brigade wants to only promote hypocrisy. We can show women being harassed and maligned but if they want to initiate dialogue Nd take power into their own hands, it scares us?? Cowardly act to shut it down! Shame!”

Mohabbat Tujhe Alvida actress Mansha Pasha wrote, “Unfortunately we are moving towards a Zia-esque time of Moral policing. Meanwhile the state silences journalists, runs after biscuit ads and begins its bans on OTT content. What started off as a causal critique by bloggers of what content should or shouldnt be on tv has now.”

The Diyar-e-Dil actor, Osama Khalid Butt also posted, “Oh, you got Churails banned? Congratufuckinglations. Now please focus your outrage on the fact that police have failed to arrest the prime accused in the motorway rape incident.”