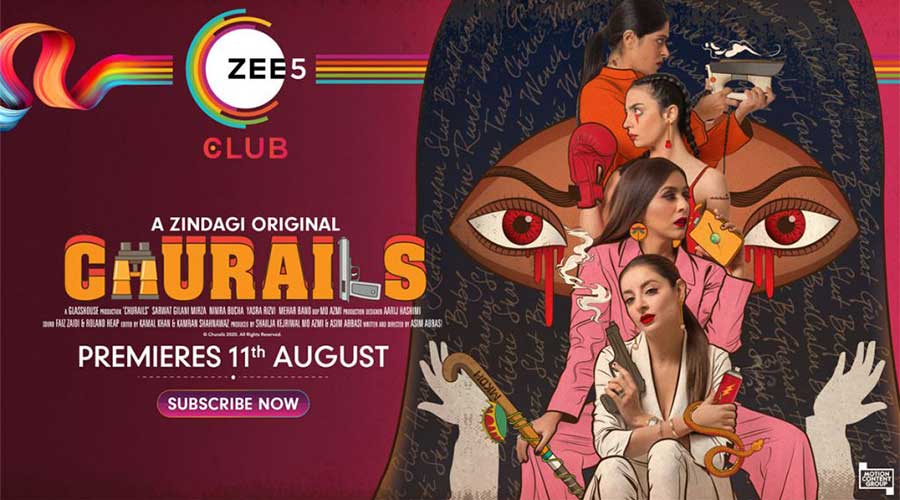 Pakistani original web series Churails will be streamed for the first time on Indian streaming platform Zee5 at the beginning of August that would play on Zee5’s Zindagi world cinema strand.

Churails series is 55 minutes of an episodic show that has 10 parts and will be uploaded from 11th August and all episodes will be available at the same time that will enable binge-watching.

The series is about four self-proclaimed Churails who are independent, strong, and intellectual. These four Churails operate a hidden detective agency and their major work is to expose cheating husbands belonging to the elite class of the city.

Read more: Besides Ertugrul, here is the list of Turkish hit series on Netflix

Later they become the saviors of harassed, mistreated, abused women with the expansion of their operations. Moreover, these series cover many domestic and other issues of society that include sexism, the domination of the upper class, and child abuse, etc.

Its cast includes Nimra Bucha, Yasra Rizvi, Sarwat Gilani Mirza, and Mehar Bano and the series is directed by the UK based director Asim Abbasi.

South Asian broadcast giant Zee launched Zee5 Global in October in 2018. It operates a hybrid business model, including subscription video-on-demand ad-supported (AVoD) variants, as well as 60 linear channels, it now supports in 18 languages and its app is available in 173 countries.

Chief Creative Officer special projects of Zee Entertainment Enterprises Shailja Kejriwal said, “There is an increasing need for women’s voices to be heard, and not stereotype fierce women for their strength, or patronize them for their insecurities. ‘Churails’ is bold, vulnerable and empowering all at the same time,”