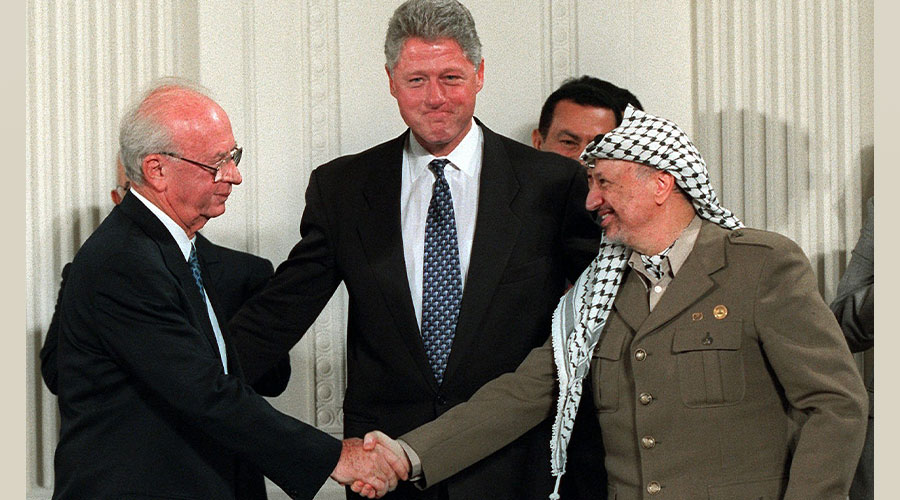 Regardless of several table talks to bring peace in the Middle East between Palestinians and Israel for 70 years, the disagreement between lands, holy sites remains unsettled.

Here is a short history when and where talks held to end the disputes but failed.

The United Nations Security Resolution 242 was passed on 22nd November 1967 in which the UN recommended the exchange of lands for peace in the Middle East. After the resolution, whenever there are peace talks it is referred to as 242.

In October 1973, the alliance of Arab state which was led by Syria and Egypt fought Israel in the Yom Kippur War.
The war led towards a secret peace talk that produced two treaties after 12 days of combat.

The Soviet Union and the US organized a conference in the capital of Spain Madrid. Israel, Lebanon, Syria, Jordan and Palestinians were involved in the discussion. Although the conference did not get the desired results it did create a framework for later discussion of the peace process.

Between Israel and Palestinian Liberation Organization (PLO) meetings were arranged in Norway, which was the first time both parties met with each other directly resulted in the “the Oslo I Accord”.

The agreement was signed in the US in 1993 in which the demands that the Israeli forces will withdraw from West Bank and Gaza and self-governing Palestinian authority will be set up for a five-year transitional phase were agreed upon. Another agreement was also signed in 1995.

The US President Bill Clinton invited PLO chairman Yasser Arafat and Israel PM Ehud Barak to discuss border management, security, settlements, refugees, and Jerusalem. Despite the detailed negotiations, no settlement was made.

Arab league planned an Arab Peace Initiative in Beirut in March 2002. In the plan, it was suggested that Israel must withdraw from the pre-1967 border so that Palestinians can have their own state which includes West Bank and Gaza. And in return Arabs will recognize Israel as a country.

The US, Russia and the United Nations (UN) constantly worked for a pace and they develop a two-nation solution for Israel and Palestine. The PM of Palestine Mahmoud Abbas accepted the test but Israel’s Prime Minister Ariel Sharon had objections with the wording used in the pact. The final agreement on a two-nation theory or two-state theory solution for the Middle East peace was to be reached in 2005 but it was never implemented.

President George W. Bush arranged a meeting at Annapolis, Maryland in order to start the peace process again. Both prime ministers from Israel and Palestine took part in it along with several Arab countries. At the conference, it was agreed that peace will be finalized at the end of 2008.

Again in 2010 talks began as both PMs agreed to re-launch direct negotiations to solve all the problems but after some weeks of talk, a deadlock began.

In 2012 an outbreak started in Gaza and around its territories, it was started for 2 years and a ceasefire was held in 2014. In June 2014 three Israeli teenagers were kidnaped and killed which started the violence again, again the ceasefire was made on the 26th of August, 2014.

Representatives from over 70 countries were assembled in Paris, France for a debate over the issue between Israel and Palestine. Israel shut the door by saying the conference is “Rigged” against its country. None of the representatives from both countries attended the meeting. In the summit, the French foreign minister suggested a two-state solution is the only possible way to move ahead peacefully.

Everything was moving in the right direction for a peace process and then an attack on Israel police happened at Temple Mount which is a holy place for Jews and Muslims, ignited the clash, and in the critical situation, US President Donald Trump announced to move its US embassy to Jerusalem.

In 2020 US President revealed a peace plan also called by the proponents the ‘the deal of the century’ which stops all Israel’s current settlement construction but gave away Israel the right to control over many of the illegal settlements it has previously build. The plan was immediately rejected by Palestine. The US backing emboldened Israeli PM who is now planning to go ahead with the annexation of the eastern part of the West Bank