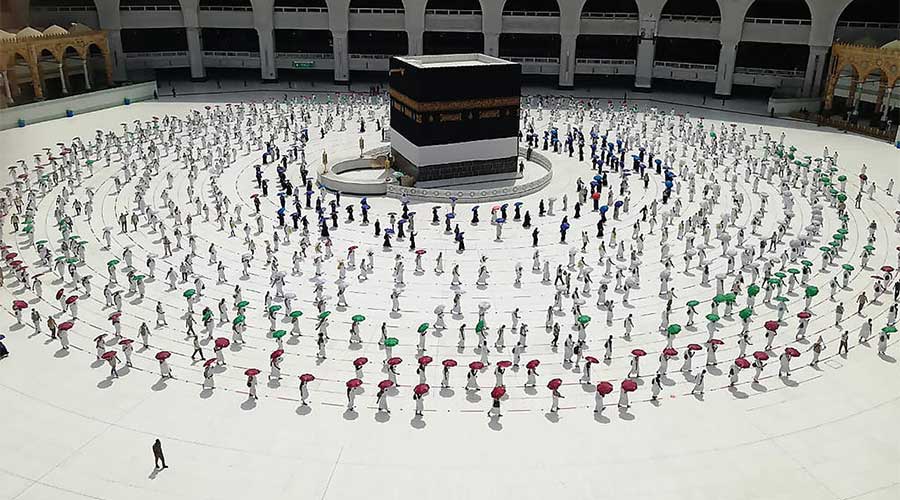 Hajj 2020 is started but with lots of alteration applied due to coronavirus pandemic. Up to 10,000 Muslims covering their face with facemasks started the five-day pilgrimage journey while maintaining distance, and moving in small groups after spending days in isolation.

Only last year around 2.5 million people traveled to Saudi Arabia and performed the religious ritual Hajj in the holiest city of Mecca. However, this time under the pandemic the numbers reduced to 10,000, and only those people were allowed who were already residing in the Kingdom.

The Director of Public Security Khalid bin Qarar Al-Harbi said that “There are no security-related concerns in this Hajj pilgrimage, but [downsizing] is to protect pilgrims from the danger of the coronavirus pandemic”.

The blessed participant wore masks and started the tawaf around Kaaba while maintaining physical distance in Masjid al-Haram.

The selected participants were gone under a temperature check followed by a short quarantine time before the beginning of the rituals.

Workers of the holy site were seen sanitizing the pilgrims along with their belongings and as per reports authority gave electronic wristbands to pilgrims in order to track down their locations.

Outside Kaaba, at least a 5 feet distance was maintained between the hujaj (pilgrims) and touching or even kissing the Kaaba is not allowed this year as per coronavirus restrictions.

In this year’s Hajj, authorities installed many facilitation points and mobile clinics to deal with any kind of emergency.

International media does not have access to this year’s Hajj coverage as the Kingdom squeezed the entrance to Mecca.

Hajj usually is the world’s largest religious gathering and Hajj is one of the five pillars of Islam. Hajj is obligatory once in a lifetime for the one who is financially and physically fit and capable of doing it.

The largest coronavirus outbreak in Middle East is observed in Saudi Arabia as cases are about to touch 275,000 mark and this is the reason officials quarantined every pilgrim for the safety of everyone.

Nonresidents from around 160 countries placed requests for Hajj permission via the online selection process and the majority of the turned-down applicants were disappointed over the selection point.

The government did reduce the pilgrim’s numbers in order to prevent the COVID-19 but on the other hand, it is costing the economy very badly as the Hajj brings $12 billion to Saudi Arabia’s gross domestic product every year.