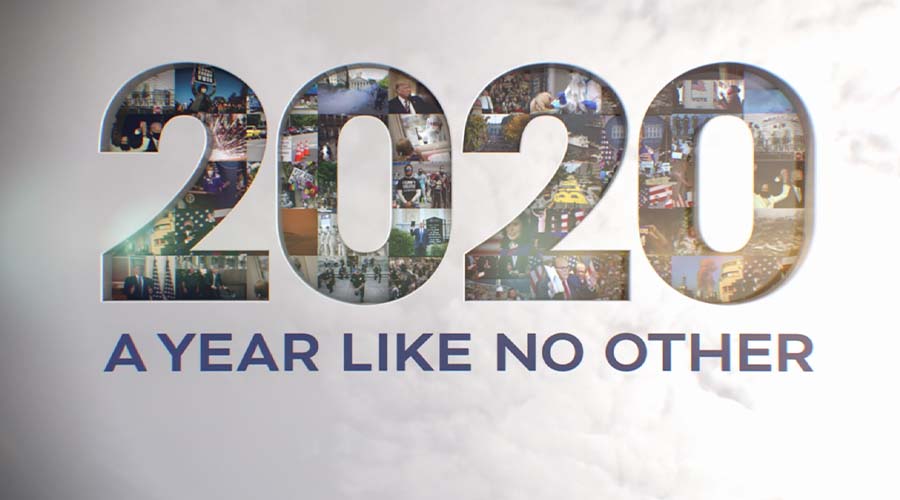 2020 was a roller coaster ride and that can be aptly defined as Chaotic. Unpredictable. Unprecedented.

In 2020, the Covid-19 pandemic cast a long pall, but in a turbulent US election, President Donald Trump was defeated by Joe Biden, tensions along borders rose fears of inadvertent escalation, and the Black Lives Matter movement shook the world.

Beijing announces its first death from a disease that will become known as Covid-19 on January 11, less than two weeks after it alerts a spike of pneumonia cases “of unknown cause”.

A pandemic was announced in March and half of humanity was rushed into a lockdown a month later as governments struggle to avoid its spread.

As the International Monetary Fund expected a contraction, major state aid programs were being carried out to save employment, with the global economy falling by 4.4 percent.

Drug firms announced promising outcomes for multiple vaccines in November as the second wave of cases hit the world.

The first shots are given within a month, but by then some 1.6 million people have died, with the US being the hardest affected.

Top Iranian commander Qasem Soleimani was killed in a US drone strike in Iraq on January 3, days after pro-Iranian protesters raided the US embassy in Baghdad.

By firing a volley of missiles at bases in Iraq housing US soldiers, Iran retaliated. Shortly after taking off from Tehran, the Ukrainian passenger plane “in error” was shot down the same day, killing all 176 people on board.

Tensions began again as Iranian scientist Mohsen Fakhrizadeh was assassinated at the end of November, meanwhile Iranian’s blamed Israel for doing it.

After the Brexit referendum in 2016, Britain became the first country to leave the European Union on 31 January.

But critical negotiations drag on for months on potential links and trade with the bloc, breaking deadlines after deadlines till just seven days before the imminent hard Brexit on 31 December, Britain sealed a narrow Brexit trade deal with the European Union.

On February 29, the US and the Taliban signed an agreement in Doha, with all foreign troops leaving Afghanistan by May 2021, after nearly two decades of war.

Talks began in September between the Afghan government and the rebels, but fighting continued as the Taliban launch attack after attack.

The death of George Floyd, a 46-year-old African American, by white police officers in Minneapolis on May 25 triggered rallies throughout the United States and stimulated worldwide anti-racism marches.

After George Floyd death, Black Lives Matter movement started which led to a key debate regarding race and the overthrow of statues of people related to slavery or colonialism.

On August 4, a major explosion destroyed most of the port of Beirut and ravaged parts of the capital, killing more than 200 and injuring at least 6,500.

The explosion of a massive ammonium nitrate fertiliser stockpile is crippling the already shaking Lebanese economy and the legitimacy of its ruling elite.

In what is known as the “Black Summer,” massive bushfires rage through Australia while San Francisco and other parts of the American West Coast woke up to orange skies in September as the state’s largest ever inferno breaks out.

After becoming violently ill from tea he drank while embarking on an internal flight to Moscow, Kremlin critic Alexei Navalny was flown to Berlin in a medically induced coma.

Tests also shown that the Soviet-era nerve agent Novichok was contaminated. Navalny accuses Vladimir Putin, the Russian president, of attempting to kill him.

Members of the opposition were imprisoned or forced into exile.

Record numbers of Americans voted in the US election held in November and chose their new president Joe Biden. Biden took the White House by seven million votes after four days of nail biting. Without evidence, Trump shouted fraud.

Severe fighting continued for 45 days in the Armenian-populated territory of Nagorno-Karabakh, which broke out of Azerbaijan after the 1990s war.

The Tigray People’s Liberation Front, which for nearly three decades has dominated Ethiopian politics, rejected responsibility and claimed the attacks mentioned are a cover for an “invasion.”

On November 28, federal forces took over the Tigrayan capital.