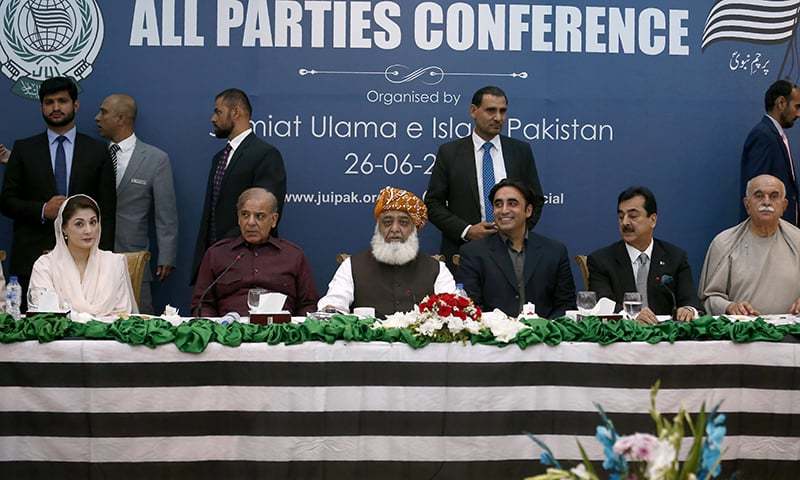 The opposition formed an alliance called Pakistan Democratic Movement (PDM) commanded immediate resignation from Prime Minister Imran Khan, set forth a long list of demands, went to war with Pakistan Army and announced a nationwide protest against PTI’s government. Will the Imran Khan-led government mull over the demands of the newly created anti-government Pakistan Democratic Movement?

The opposition parties demanded an immediate accountability law should be made in reference with the recent judgment of the honorable Supreme Court, the recommendation of the Islamic Council and based on reports of Human Rights Watch in order to guarantee accountability across the board.

The opposition also demanded the formation of a ‘Truth Commission’ which will scrutinize and write the real history of Pakistan since 1947.

In addition to the meeting, the members also decided to build a committee that will evaluate the Charter of Democracy and forward a plan which is according to the Quaid-e-Azam vision and Pakistan’s 1973 constitution in order to create the real modern Islamic Welfare State.

Furthermore, the leaders of the opposition parties requested the removal of paramilitary Frontier Corps (FC) check posts and reinstate the civil supremacy in Baluchistan.

In the conference, the opposition parties rejected the presidential system which is circulating in Pakistan’s politics, saying PDM believes parliamentary democracy is the system that guarantees the country’s protection and sovereignty. The opposition swore to protect the supremacy.

Furthermore, the PDM demanded that before turning Gilgit Baltistan into a province, the government must guarantee that free and fair elections will be conducted

Meanwhile, they said that due to the government policies which ruined the economy has become a threat for Pakistan’s sovereignty and defence.

At the end, the opposition also criticized the false references and cases put against sitting judges, saying that these kinds of tactics against the independent judiciary are a risk to state security.