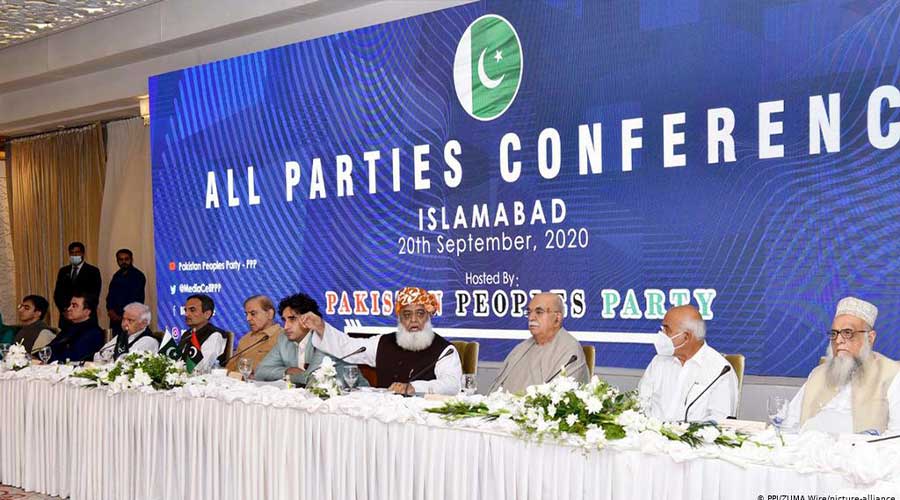 Pakistan People’s Party (PPP) hosted the All Parties Conference (APC), in which all the members of the APC ratcheted up their narrative against alleged rigging in the 2018 general election, and wanted that establishment read Pakistan Army should not intervene in politics and restrict to the role declared in the constitution of Pakistan.

A total of 26-point resolution and a seven-point action plan was concluded after a day-long huddle by the members of APC which presented in a press conference and put forwards their demands which include, free and fair elections under reformed election commission and without the supervision of armed forces and agencies.

According to the APC, the action plan of Pakistan Democratic Movement is to put pressure on the government and get PM Imran Khan resignation and in the first phase of implementation, the opposition parties will gather support from farmers, students, lawyers, civil society, traders and from media in order to hold gatherings in different locations from October. The second phase of the plan will be an increase in the rallies and bigger protests will start in December, which will lead towards a “decisive long march” starting from January 2021.

According to the press conference, the APC members further revealed the action plan compiled by the opposition parties and said that we will use all democratic, political, and constitution possibilities obtainable within the parliament or outside the house.

A no-confidence movement is also an option for the opposition along with termination of parliament by giving their mass resignations from the national, provincial assemblies and senate at a fitting time. A special committee is being formed which will further conclude the action plan.