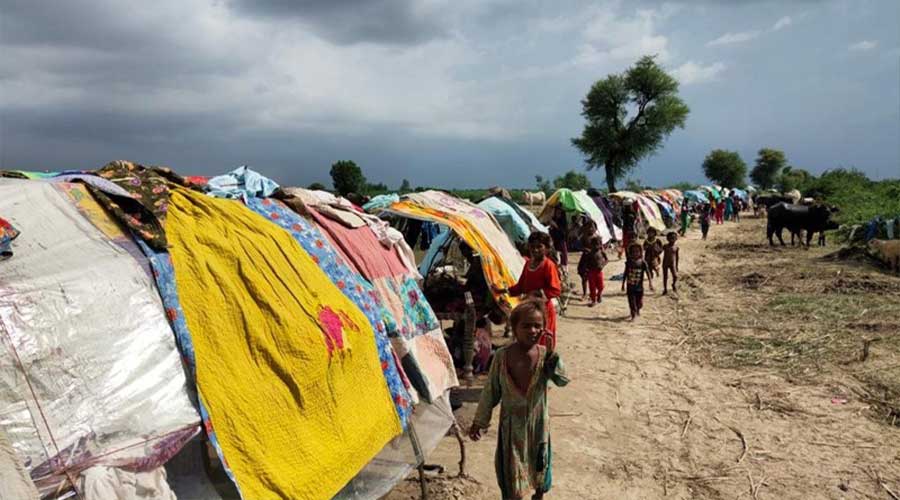 The rains and floods affected people of Naukot Fort and Mithi town staged a protest demonstration and did a 50 kilometer long march on foot demanding the functionaries concerned to provide food, safe drinking water, medicines, and basic facilities of life.

Mavi Kolhi, Soomro Bai, and Sobho Bheel led the march said in their speeches that they were enforced to leave their residential areas as heavy rain storms and subsequent breaches in the Left Bank Outfall Drain, and other drains and irrigation waterways submerged their houses.

The rain victims who have taken shelter atop sand dunes in Tharparkar district of Sindh criticized that chairman of Pakistan Peoples Party Bilawal Bhutto Zardari and Chief Minister Syed Murad Ali Shah had issued directives during their visit to Thar to the functionaries concerned for extending help to the rain victims, but they continue to experience drastic conditions at the relief camps.

They also said that they have faced chronic issues and are exposed to sunlight. Their families and specially aged members of family and children have been suffering from many water-borne diseases as they have no access to clean water but taking contaminated water for so long has disturbed their stomach.

They then threatened to surround and besiege the office of the Thar DC if they do not be provided with proper food, clean drinking water, relief goods, and other amnesties.

They said that high-ups of the Sindh Government should announce the relief package now or they would not tolerate. They alleged that officials, including the DC, were distributing the relief goods only among their favorites on chits issued by PPP leaders.