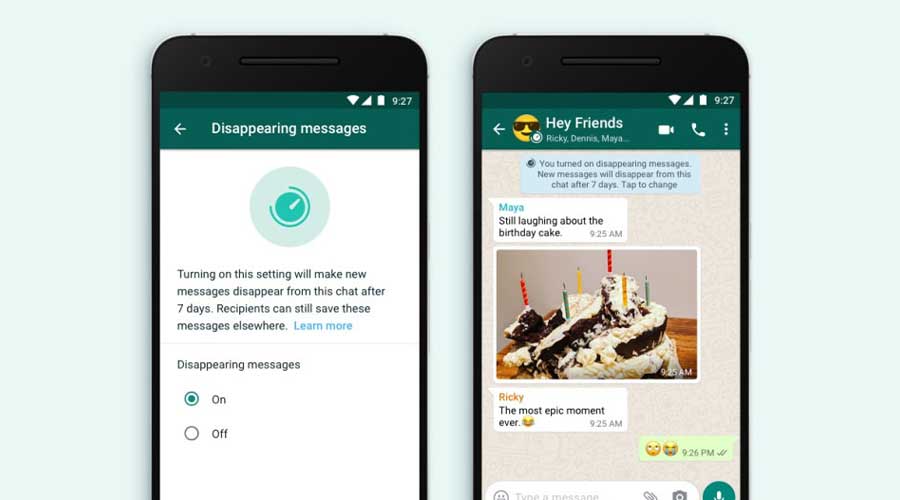 WhatsApp has officially announced that it will be introducing a new ‘Disappearing Messages’ feature through an update that rolls out globally this month.

After comprehensive testing of the disappearing message feature in beta mode, WhatsApp revealed that the feature is ready to be rolled out and will be available for WhatsApp users at the end of this month.

Disappearing Messages has started rolling out from today, and will be available across Android, iOS, and Linux-based KaiOS devices, along with WhatsApp Web and Desktop platforms, by the end of this month.

After the new WhatsApp update, users will be able to enable disappearing messages on chat conversation which you had with your family or friends. After seven days of interval, the message will be deleted automatically. The WhatsApp disappearing message function can be activated for individual chats and for groups as well.

Talking about newly developed disappearing messages, a WhatsApp spokesperson said, “We’re starting with seven days because we think it offers peace of mind that conversations aren’t permanent while remaining practical so you don’t forget what you were chatting about. The shopping list or store address you received a few days ago will be there while you need it and then disappear after you don’t.”

However, the disappearing messages option is still lacking security as you can still be able to take screenshots of the screen and or simply copy the messages you have received or download the media content. In the disappearing feature of your messages, chat, images, GIFs and videos all data will be wiped out in seven days.

It is pertinent to mention here that the disappearing feature will be only applicable to new messages, the latest feature does not work for the old messages. You have to enable this feature manually for every contact in contact settings.