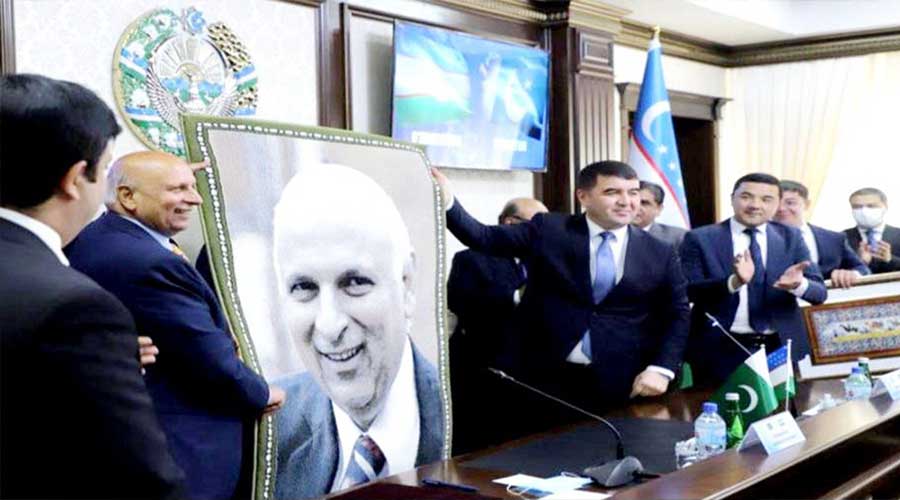 Uzbekistan and Pakistan showed resolve to enter into a preferential trade agreement and cooperate in shipping, textile, engineering and information technology sectors.

Investors of Uzbekistan’s Namangan Province have announced plans to invest in the textile and other sectors of Punjab, assured to provide full technical assistance to Pakistan for increased cotton production.

Read more: Mazar-i-Sharif-Kabul-Peshawar corridor hailed as ‘project of the century’

Governor Mohammad Sarwar with his delegation received a warm welcome from high-ranking officials of Uzbekistan and members of the Pakistani community.

Also, to honor the Punjab governor and to express solidarity with Pakistan, a permanent flag of Pakistan was installed in The Square of Three Fountains in Namangan city adjacent to the office of Namangan Governor.

Governor Chaudhry Mohammad Sarwar, during the visit with the delegation, visited the Uzbekistan Business Forum. There he met delegations of experts working in the fields of textiles, health, agriculture and trade. The increased cooperation and trade between the two countries were also discussed.

Moreover, Punjab governor said that the Uzbekistan investors are willing to invest and to facilitate in sectors of textile, business, tourism etc. He further said that we also have assured them of our full assistance. Punjab Government is establishing new SEZs in many cities of the province for foreign and domestic investors.

He went on to say that we are working with the business community with the vision of Prime Minister Imran Khan to promote investment in Pakistan. He added that other countries will also visit with business delegations for enhanced bilateral trade and investment.