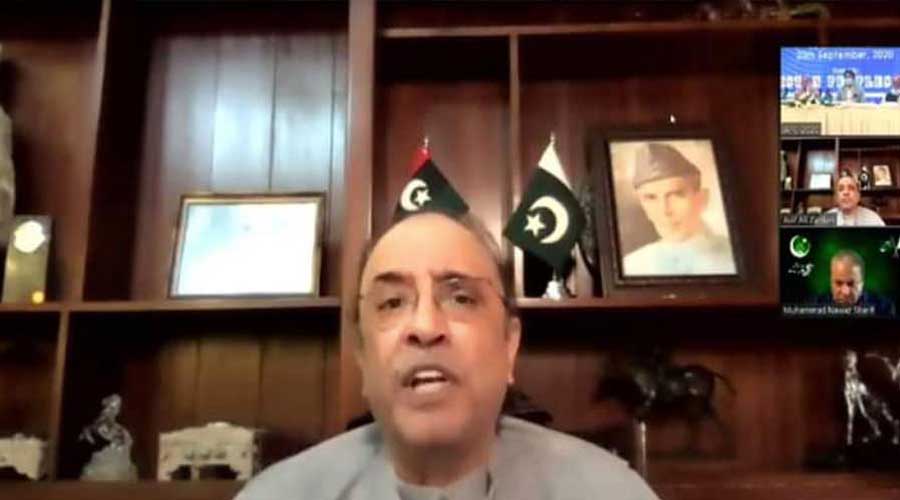 Speaking at the APC, PPP co-Chairman Asif Ali Zardari said that the opposition will send this government packing and will restore true democracy.

The former President and Co-Chairman of Pakistan People’s Party Asif Ali Zardari delivered the opening speech at the APC held on Sunday. They claimed that this meeting should have taken place a long time ago and said that it’s time to take lethal actions in order to reinstate the true shape of democracy in the country.

Asif Ali Zardari who joined the All Parties Conference via video link hosted the event and bashed the PTI’s government as they are trying to suppress the opposition parties and imposed restrictions on media as well.

The PPP co-Chairman stressed the participants to formulate a strategy for sustainable democracy. Zardari also expressed that this grand alliance of APC will send the government back to their home and true democracy shall be restored in Pakistan.

Meanwhile, talking about the 18th amendment which provides immense power to provincial governments, is a wall shielding the Constitution and nobody would be allowed to revert it back.

The former President also thanked the former Prime Minister of Pakistan Nawaz Sharif for appearing in the APC via video link and requested other members of the event to pray for his health.

Mr. Zardari, who has been granted bail by the court on medical bases greeted PML-N supreme leader Mian Nawaz Sharif and party Vice President Maryam Nawaz in the group. He also said that he can understand what Maryam is facing at the moment as “My own sister has gone to jail as well as my wife,” he added.

“We pay tribute to you. We will stand by you and continue fighting for your cause and I am sure you will keep fighting for ours.”

About media freedom, Asif Zardari said that we are observing censorship in the country which is a sign of the government weak strategy. “The voices emerging from the media won’t be suppressed.”