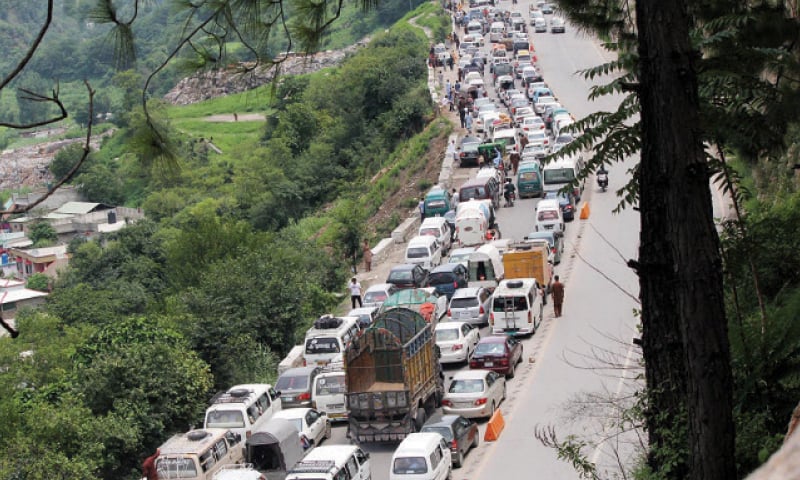 Owing to coronavirus pandemic, the administration barred thousands of tourists from entering Swat and Mansehra and huge traffic was jammed at the entry point of both regions during the Eidul Azha holidays.

There were long queues of vehicles at Sangar, Landakey, and Shamozo check-posts that caused many problems for the residents of Swat. This is why a ban was imposed on the tourists by the provincial government to enter Swat. However, when police stopped the entry to Swat, many tourists managed to visit Shangla.

On the very first day and second day of Eid, thousands of tourists tried to enter Swat but they were stopped by the police at check posts. Ahmad Ali, a tourist from Mardan said “We had planned to visit Swat during the Eidul Azha holidays. We started our journey after performing sacrificial rites but we were stopped at Landakey checkpost by police asking us to go back,”.

Among the many tourists who were trying to enter Swat and Mansehra, another tourist from Peshawar Ikram Ali complained, “I personally saw that many vehicles from Islamabad, Peshawar, and Lahore were allowed to enter Swat but common people were not allowed. It means there are two laws in Pakistan for poor and rich people,” Many tourists entered Swat who had some administration links and some who alleged VIPs were allowed to enter.

Tourists from Punjab and different parts of Khyber Pakhtunkhwa visited the scenic spots of Shangla including Yakhtangay, Bahadar Sar, Kandaw, Jabba, Ajmer and Logay to enjoy the Eid holidays.

Deputy Inspector General of Police DIG Qazi Jamilur Rehman said, “We have sent back tourists to their respective cities from the check-posts established in Mansehra and Balakot. This practice will continue until the government lifts the ban on tourism activities in the province.”