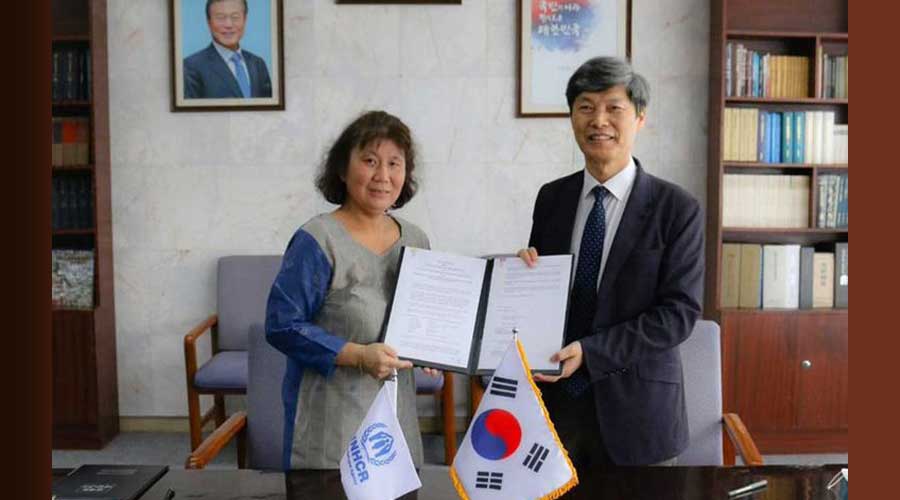 The government of South Korea donated one million dollars for a new UNHCR project to empower Afghan refugees in Pakistan.

United Nations High Commissioner for Refugees (UNHCR) and South Korea are working closely for the betterment of Afghan Refugees in Pakistan and they have joined hands to start the latest project by UNHCR in Pakistan that will focus on strengthening the volume and resilience of Afghan refugees.

According to the Letter of Understanding (LOU) signed between South Korean Ambassador Mr. Kwak Sung-Kyu and UNHCR representative Ms. Norika Yoshida at the Embassy of the Republic of Korea in Islamabad, The project will last for one year and it helps around 100,000 Afghan refugees residing in Pakistan by providing community-based protection along with livelihood support.

The South Korean Ambassador Kwak Sung Kyu in the signing ceremony of the project praised the people of Pakistan and the government for their hospitality towards Afghan refugees who are hosting them for four decades.

“Korea is stepping up its efforts to support refugees in the spirit of burden and responsibility-sharing. We are hopeful that this aid will be instrumental in empowering young refugees and help make them self-reliant,” he added.

The representative of United Nations High Commissioner for Refugees (UNHCR) in Pakistan Ms. Noriko Yoshida greeted the Korean government stance and their significant contribution. Ms. Norika Yoshida also mentioned through the LOU signed with South Korea, it will support UNHCR actions to resolve the issues the Afghan refugees are facing in Pakistan, increase protection level along with assisting those who need the most. “This project will help many refugees stand on their own two feet,” she said.

The UNHCR Islamabad is focusing on the refugees to stand on their own feet while establishing small businesses in the agriculture field and also by providing them with professional training. The program will make sure that it will enhance the capability of immigrant volunteers in order to get them better prepared for the betterment of the Afghan refugee living in Pakistan.