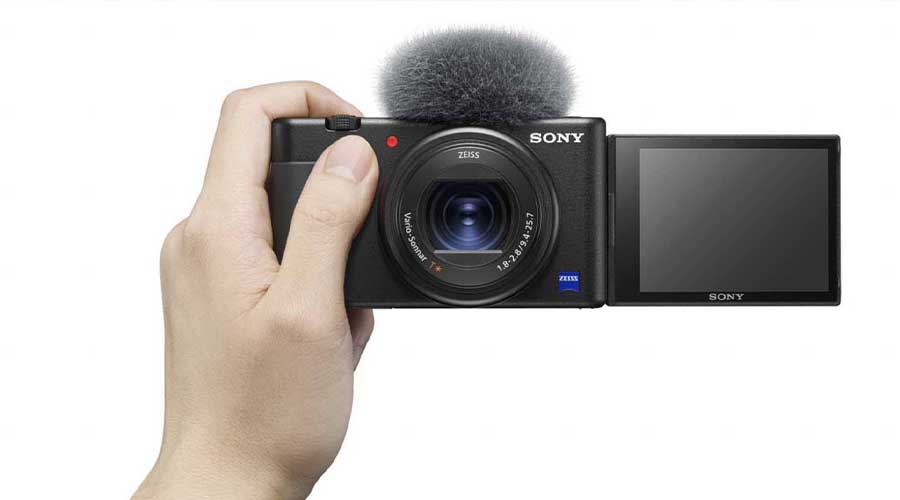 The ZV-1 is an RX100-series camera designed specifically for vlogging that features S-log, ND filters and a 3-capsule mike.

The specification of the camera is 4K video, 1 inch Exmor sensor along with Zeiss lens which is equal to a standard, 24-70mm zoom. The opening of the lens is from f1.8 to f2.8.

The Sony ZV-1 sensor is 3:2 format and has a 20.1 megapixel resolution. A full 20 megapixel in 3:2 mode while 13mp on 1:1 mode, 18mp in 4:3 mode and 17mp in widescreen. With all these formats and capturing options, Sony’s ZV-1 is very handy for YouTubers, influencers and vloggers.

The high frame reporting runs up to 1000fps. There is a vertical option in video mode also for those vloggers who prefer to shoot for mobiles.

With the rotating skin along with Sony’s capsule mic provides clear and perfect sound while standing in front of the camera. Noise cancelation is also added to the device but Sony also included a 3.5mm input jack and Sony’s MI Shoe for other connecting accessories.

By keeping in mind all the friendly features required by Vloggers, Sony tried to insert them all. Sony provided a touch screen, an artificial intelligence system for quick and smart face detection, face improvement auto exposure, image steadiness, and automatic background bokeh control. You can integrate this camera through a desktop app or with your smartphones.

This is not just another ordinary vlogging camera as it also holds other feature which can be found in other professional cameras.

With these features, not only Vloggers or YouTubers but journalists will also show interest in buying the camera as it is a clear replacement of costly mobile devices or can be used as a backup camera as Sony set a very economical price on it.