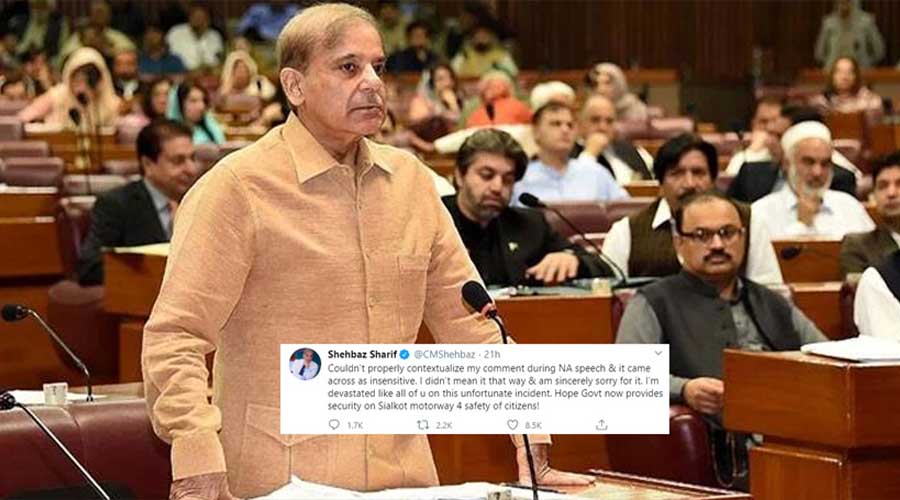 The PML-N President Shehbaz Sharif apologizes for insensitive comments he made during a parliament session while discussing the Lahore motorway rape incident.

A woman was gang-raped on September 9 in front of her children by two men after she ran out of fuel while driving towards Gujranwala on the newly opened Lahore Sialkot motorway.

While addressing to National Assembly Opposition leader Shehbaz said, “I ask you to initiate an inquiry into this issue, that when on a motorway, the Sialkot motorway and I do not think it is not inappropriate to say that this motorway was made Alhamdulillah by the PML-N under Nawaz Sharif’s leadership.”

Shehbaz Sharif further shared the projects which were completed in the PML-N tenure and gave all the credit to Nawaz Sharif.

Twitter was unforgiving on opposition leader Shehbaz crass comments and thousands of citizens including showbiz personalities called him out on social media.

After the outrage, Shehbaz Sharif finally apologizes for the insensitive motorway speech through his official account.

The former Chief Minister of Punjab apologized for being able to “properly contextualize [his] comment”. “I’m devastated like all of you on this unfortunate incident. Hope the government now provides security on the Sialkot motorway for the safety of citizens,” Shehbaz wrote.

The rape victim had reportedly called motorway police after insufficient fuel in his car near Gujjarpura, however, motorway police declined to provide service by saying the specified zone is not under their dominion.

In the same National Assembly session, the Federal Minister for Communication Murad Saeed revealed that the rape did not happen on the said motorway, however, he also did not expose the exact location of the barbaric incident. The Federal Minister also told the members that he himself listened to the call which was made to motorway police and the law enforcement agency did not hang up the rape victim.

“Speaker sahib, I myself heard the call,” the minister said. “A call was made to 130 and he doesn’t say it is not their jurisdiction.”