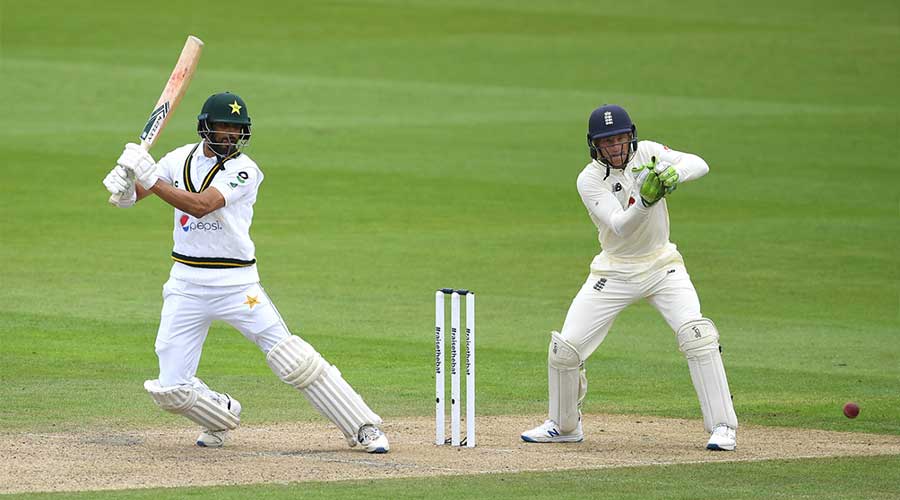 What a memorable day it was for the opener Shan Masood who joins a league of legends with the career-best knock of 156 off 319 balls.

He became the sixth Pakistan Test cricketer to score three centuries in successive innings and also becomes the first Pakistan opener since Saeed Anwar to score hundred in England which was 24 years ago.

The last time opener Shan Masood visited England for a test series it was back in 2016 in which he was dismissed six times by Anderson. Shan scored 71 runs in total, but this time improved Shan depicts the quality he can produce.

Pakistan side was in all-control after opener Shan Masood played a splendid innings of 156 runs while facing 319 balls. England was 4 down while scoring 92 runs at the end of day two of the first test in Manchester. The lethal attack by Pakistani bowlers left England reeling at the end of the day.

At the start of the day Pakistani star batsman, Babar Azam was dismissed by James Anderson without adding any runs on the board and halted Pakistan’s impressive momentum. But Shan Masood kept going progressively and found enthusiastic Shadab Khan who played a superb knock of 45.

England batting trembled while facing Pakistani attackers Shaheen Shah Afridi and Muhammad Abbas. Both openers Rory Burns and Dom Sibley were removed through lbw. While Ben Stokes was cleaned bowled by Abbas with a sensational delivery. Pakistani Spinner Yasir Shah also took the wicket of England skipper Joe Root who was playing very defensively and scoring only 14 in 58 balls.

As the day closed England were 92-4 trailing by 234 runs with Ollie Pope and Buttler were on the crease with 46 and 15 runs respectively.

The England’s batting order will be tested throughout the series as they have to face Muhammad Abbas, Shaheen Shah, and young Naseem Shah. Although, teenager Naseem Shah went wicket less but showed desire and it felt he has a glorious future ahead.