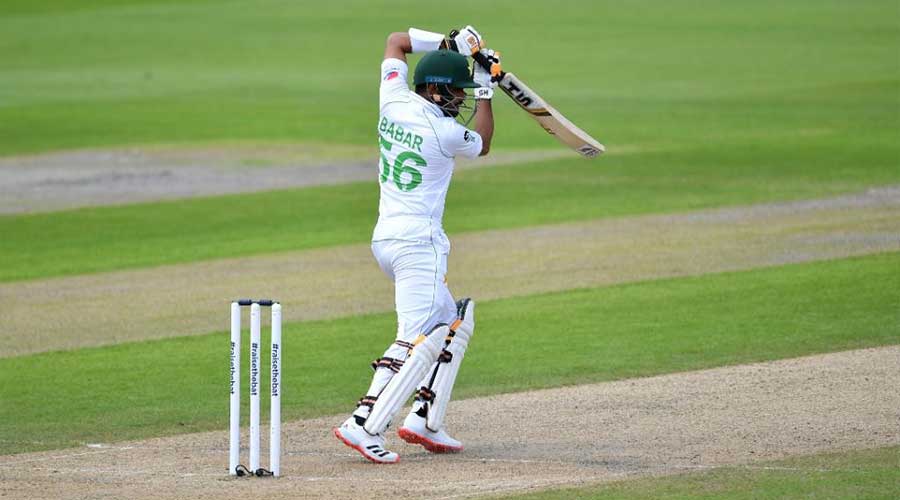 Babar Azam with yet another elegant batting scored a half-century while Buttler’s mistakes gave Pakistan a good start in the first test against host team England on Old Trafford.

Pakistani skipper chose to bat first after winning the toss but lost early wickets as Pakistan were 43-2 when Abid Ali was struck by Jofra Archer and Captain Azhar Ali dismissed by Chris Woakes.

England could have clinched another wicket of Pakistan opener batsman Shan Masood but Buttler’s two mistakes allowed him to stay at the crease.

Opener Masood and Abid faced Anderson and the in form Stuart Broad but it was Jofra Archer who took the wicket on the first ball of its second over.

After the opener Abid Ali dismissed by Archer it was Azhar Ali who was LBWed by Woakes.

Babar Azam with its sophisticated drives, racing to his 50 in just 70 balls while Shan Masood was lucky as Buttler did not grab the opportunity provided by Dom Bess.

The break of COVID-19 did not taint Pakistan’s brilliant and in form batsman Babar Azam. In the last seven tests matches Babar scored four hundred and two half-centuries.

Babar with cover drives, sweeps, back foot punches, and high-quality strokes found 11 boundaries and started the series with a positive note.
While on the opposing side Buttler struggled on the first day of the test.

Buttler was under inspection as he failed to deliver the progress but a half-century against West Indies safeguarded his inclusion in the team.

The England side remained unchanged as they grabbed a victory over West Indies after losing the first test.

For the first test match against England, Pakistan picks up two spinners Shadab Khan and Yasir Shah. By reviewing the weather condition and if Pakistan is able to provide a handsome total then these two spinners can be a very deadly combination.