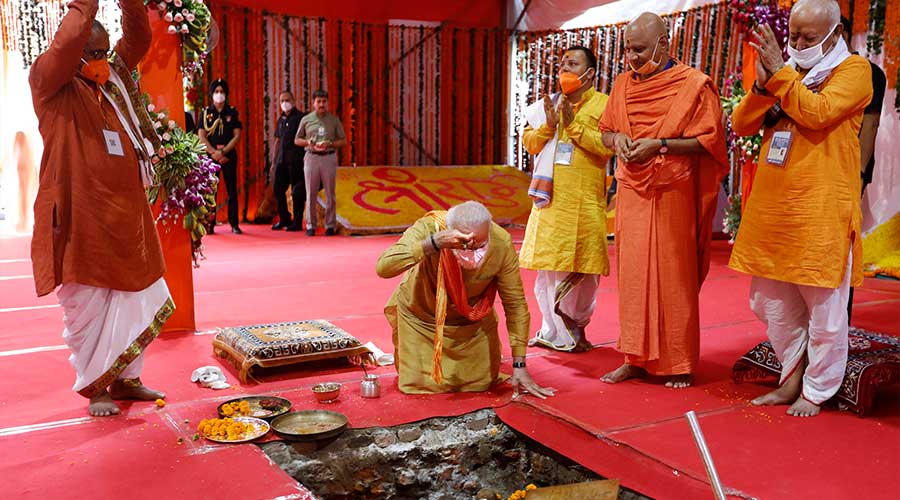 Pakistan has reacted strongly to the construction of controversial Hindu temple by India on the site of the 16th-century Babri Masjid.

The condemnation by Pakistan came shortly after Indian Prime Minister Narendra Modi laid the foundation stone – 40 kilogram silver brick – marking the start of construction for a grand Ram temple on the ruins of Babri Masjid in Ayodhya destroyed in 1992.

“The flawed judgment of the Indian Supreme Court paving the way for construction of the temple not only reflected the preponderance of faith over justice but also the growing majoritarianism in today’s India, where minorities, particularly Muslims and their places of worship, are increasingly under attack,” said a statement from Pakistan’s Foreign Ministry.

The launch is seen as a highly controversial move that will further alienate the Muslims of the country and may even ignite deadly riots all over the country.

Ayodhya is situated in Faizabad district of Uttar Pradesh (UP). As per the holy book of Hinduism, Ramayana, the majority of the Hindu community believes that Ayodhya is the birthplace of Lord Ram. Babri Masjid was built in the 16th century Mughul Emporer Babur but demolished by a violent Hindu nationalist mob back in 1992 while claiming that the mosque is constructed on the remains of a temple of Lord Ram. The destruction of Mosque ignited riots and at that time around 2,000 people were killed and the majority were Muslims.

The never-ending long battle came to an end when the Supreme Court of India gave a controversial verdict on the possession of the site. The Indian Supreme Court gave the disputed site to the Hindu petitioner and ordered the government to charge the mob involved in razing down of masjid. However, the court also directed the Indian government to provide a prominent land in Ayodhya to the Muslim community where they can build a mosque.

A long term promise has been fulfilled by fascist Modi’s Hindu nationalist Bharatiya Janata Party (BJP) with the launch of the temple.

The Muslims in Ayodhya is divided on temple decision as some believe that it will end the years of bad blood between Muslims and Hindus and brings economic growth in the area while on the other hand, majority of Muslims are against the construction of the temple.

The renowned Muslim leader in India Asaduddin Owaisi said that the Babri Masjid demolishing event will always remain in their mind and will not be removed from Ayodhya’s legacy.

Twitter users also react to the construction of the Hindu temple on the Babri Majid site. Modi is also facing huge criticism both locally and internationally for perceptively overlooking the concerns Muslim community be it the abrogation of autonomy of only Muslim majority state Kashmir, the decisive CAA and NRC or the Ram Mandir on site of Babri Masjid.

The activists are condemning the actions taken by the Indian government with the hashtag #BabriZindaHai on Twitter and calling Modi an extremist.