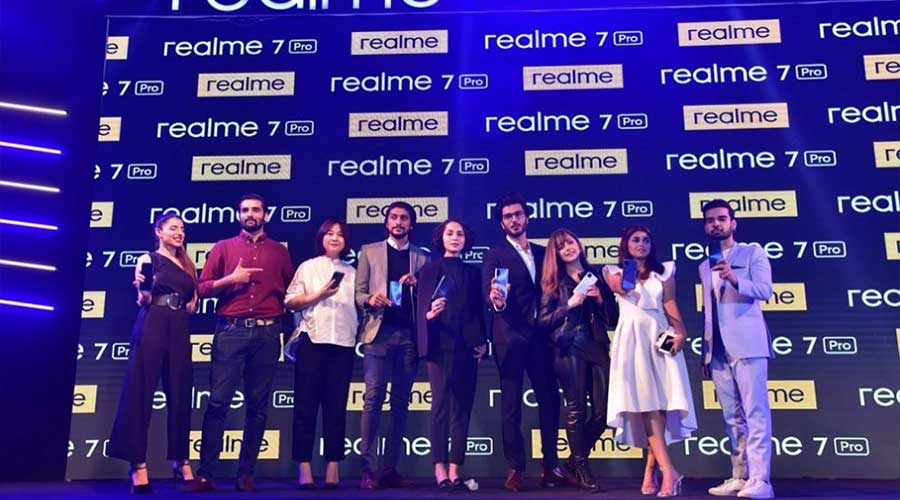 The realme grand event was held at Lahore, and many stars featured in the event such as Imran Abbas, Alizey Shah, Nimra Khan, Anumta Qureshi. Apart from celebrities, top media brands also participated in the event.

The latest addition in the realme family realme 7 pro charges battery to 100% and just takes only 34 minutes. The smartphone is inserted with Qualcomm Snapdragon 720G Mobile Platform and 6.4 inches Super AMOLED full screen. The smartphone has been integrated with 64MP Quad Camera along with Sony IMX682 sensor and a 32MP selfie camera.

The newly released Realme Watch S at Rs 14,999 is a very attractive smart wearable launched internationally debuted for the first time in Pakistan and will be available globally along with the smartphone lineup.

Realme C15 is also launched in the event which costs Rs 22,999 and comes with a special snapdragon version and the application of geometric gradient design for the first time. The affordable phone features a popularizer mega 6,000mAh battery so you can keep enjoying non-stop. As per the tests conducted in the lab by Realme testers, the phone could last for 57 days in standby mode.

The Realme Buds Air Pro was also launched in the event which will cost Rs. 13,999. The buds have an active noise cancellation capability and are entirely water resistant.

The other two products unveiled are home products that include Realme N1 Sonic Electric Toothbrush and Realme Smart Cam 360°.