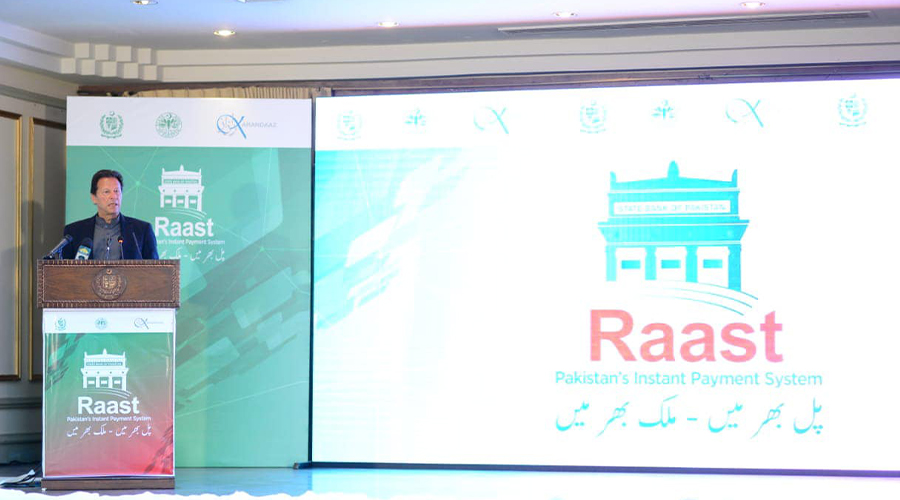 The Raast Instant Payment System, developed by State Bank of Pakistan in collaboration with the Bill and Melinda Gates Foundation, is the most modern system which is part of the prime minister’s “Digital Pakistan Vision” and based upon International Standards like ISO 20022.

Out of 220 million people, there are only two million who pay the taxes and 30,000 taxpayers are those who make 70% of the total tax collection in the country. The cash-based economy is the biggest hurdle in tapping the true potential of Pakistan, said Prime Minister, Imran Khan while addressing the ceremony of launching the country’s first Instant Digital Payment System, called Raast.

The ceremony took place in Islamabad on Monday. The Prime Minister said that this significant effort of the State Bank of Pakistan will slowly take away the economy from being cash-based. He congratulated SBP for working on the big initiative of “Raast”. He said the increase in foreign remittances is due to these efforts. The Prime Minister said that through this system, we can take the benefit of 220 million population.

Before the address of the Prime Minister, Governor State Bank, Reza Baqir told the important features of the “Raast”. He said, “As the system moves forward and we get government departments integrated into the system, employees of the government will get their salaries, pension at an instant. Savers who have to wait in line at National Saving Centers will get payments within seconds and Ehsaas Emergency Cash Program another example which will allow payments to be made in seconds.”

While talking about some other benefits of this system, Reaz Baqir said, “It does so by reducing and hopefully eliminating the need for cash. Cash is the lifeline of corruption by making people move away from cash not by compulsion but by offering an attractive alternative, Raast will reduce the lifeline of corruption and for this reason, we have called the instant payment system ‘Raast’ meaning the direct way.”

He added, “All of these payments, inconveniences, opportunities for officials to create inconveniences in the way of our people will be eliminated once the system “Raast” is fully launched.”