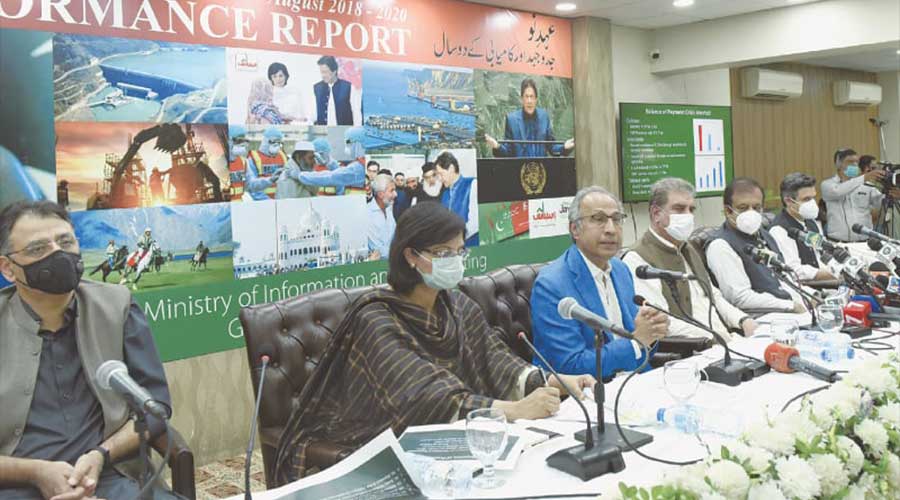 Members from the cabinets spoke to the media to feature their two-year performance report as the PTI government marked two years in office.

Foreign Minister Shah Mahmood Qureshi said the Indian government failed to isolate Pakistan globally, also added that the “narrative has shifted on Kashmir” and that the individuals of the occupied area will get the privilege to self-determination.

The Foreign Minister Shah Mehmood Qureshi also brought up how Pakistan’s Prime Minister Imran Khan, in his first address as Pakistan’s PM, had featured the issue of occupied Kashmir.

“You can watch the addresses of Nawaz Sharif and before that, Asif Zardari at the United Nations (UN) and see with your own eyes how often the word Kashmir was utilized in their speeches,” he said.

While highlighting the two-year performance report of PTI-led finance ministry, Prime Minister Advisor Hafeez Sheikh said that Pakistan was confronted with a heap of difficulties when the administration came in to control.

He expressed that Pakistan was confronted with a gigantic current account deficiency which the current government had decreased significantly because of its strong monetary policies.

The Advisor to PM said that the government of Pakistan, civil and military administration both had decreased their spending plans in its offer to austerity in the midst of financial crisis.

Abdul Hafeez Shaikh said that the government had not acquired any loans from the State Bank of Pakistan in the current year.

While talking about Ehsaas Emergency Cash Programme he said “The biggest purpose of PM Imran Khan package was that cash was given to conventional individual who were hit hard with coronavirus”.

Shaikh said that for the first time in Pakistan’s history, Rs 250 billion were given to the individuals of Pakistan “in each city and goth”. “This cash was given to 100 million individuals.”

He said that the administration had not forced any new duty in financial plan 2020-21, including that the first month of the fiscal year carried uplifting news.

Shaikh uncovered that Pakistan exports increased by 6% in the month of July, due to the result of the government policies, procedure, and economic measures.

“The FBR gathered Rs300 billion which was multiple times more than their inner assessments,” he said.

He talked about the performance of the Pakistan Stock Trade (PSX) expressing that all over the world Journals are praising PSX such as Bloomberg.

After Advisor on Finance Minister Hammad Azhar talked to media and said that Pakistan got ‘wide acknowledgment’ from worldwide on FATF targets, says Azhar.

Hammad Azhar the Federal Minister on Industries and Production said that the government introduced a construction project which was very beneficial. He said, even now the outcomes were already being felt in the nation’s economy, including that development in the nation would accelerate after the monsoon period.

Hammad Azhar also said that the officials had cut down sneaking of telephones in the state through technology. “70% of the telephones in Pakistan used to be carried. We carve that through innovative methods,” he included.

Alluding the Pakistan Steel Mills to the achievements in PTI two-year performance report, among other organizations, Minister said that a lot of segments had been “kept in the morgue” by previous governments.

“The Pakistan Steel Mills was given Rs35 billion in payments in the course of recent years and bailout bundles worth Rs80 billion were given too. It went from recording benefits to misfortunes and as of now owes Rs236bn,” as per Minister of Industries and Production.

Azhar included that the government had handled the issue “head on” by taking critical decisions and had taken the choice to include a joint partner from the private division to deal with the organization.

Talking about the Financial Action Task Force action items list, he said that Pakistan was put on the grey list during the previous government’s term. “We were given a 27-point strict action to do by a joint group, which wasn’t recently given to any other country, in such a limited time.

Azhar said that the government of Pakistan had finished 14 of the 27 things to do and out of the outstanding 13, 11 had been ‘to some extent completed’.

He also said that Pakistan used to be condemned at the FATF forum for not doing what’s necessary to handle money laundering, tax evasion and violations. However, he said during the past one year, Pakistan had gotten “wide acknowledgment” from the worldwide network.