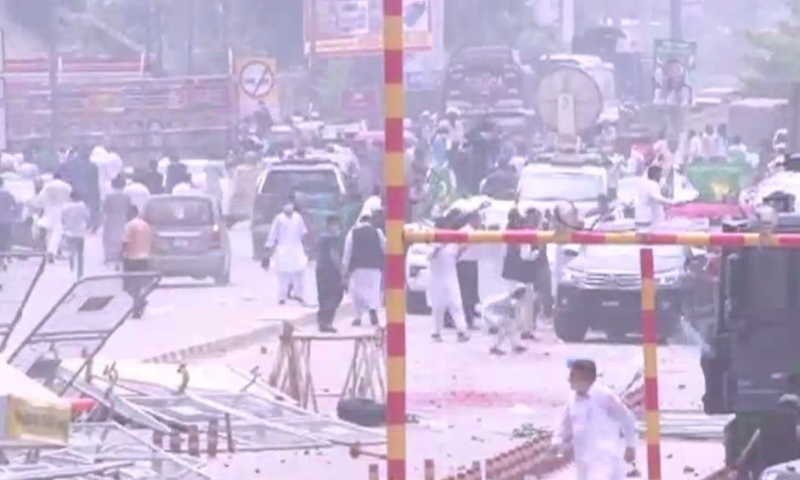 On Tuesday, PMLN workers along with their party’s leader Maryam Nawaz and police clashed outside the NAB office.

Chaos ensued outside the National Accountability Bureau office on Tuesday after PML-N workers clashed with police ahead of Maryam Nawaz’s appearance before anti-corruption watchdog.

Read more: NAB is fake Tarzan, there should be an open trial of Shehbaz Sharif

Owing to the deteriorating situation outside its office, NAB canceled the visit and told the PML-N leader to turn back home.

The daughter of former Prime Minister Nawaz Sharif left for the bureau office in Thokar Niaz Baig from Jati Umra and PML-N workers accompanied her on the way to show their support.

The police personnel deployed outside NAB office fired teargas shells to disperse the party workers and activists when they tried to force their way through the barricades placed there for security purposes. They pelted the policemen and the office with stones turning the area into a virtual battlefield. More than 15 policemen and NAB officials sustained injuries as a result of stone-pelting.

PMLN leader Maryam Nawaz posted a series of photos and videos on her twitter account and called the incident “terrorism by NAB”, where the police were seen throwing stones at her car, although the car was bulletproof yet its windshield cracked. She accused police of firing tear gas.

Another video she posted on Twitter showed the cracked windshield of her car and the PML-N leader was heard saying, “Pelting stones at my car, police have broken its windshield. This is a bulletproof car and police are pelting stones and shelling [PML-N workers] in front of NAB’s office to instigate workers.

Maryam Nawaz during the scuffle with police said to her one of the party workers, “I am standing here, if I have been called, then listen to me as well,” she also said that she came outside the bureau office to answer their questions and that she would not go back. But, no officials from the bureau took notice and no response came out of the office while NAB’s office doors remained closed.