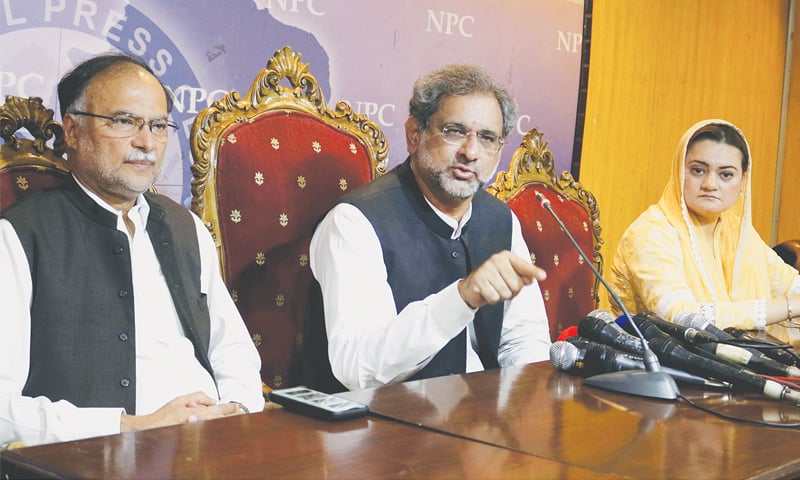 The leaders of the Pakistan Muslim League (N) said that Shehbaz Sharif should be investigated through an open trial so that the people should come to know of facts.

“NAB should investigate about the House No. 2, Lane No. 1, Zaman Park, Lahore and find out who bore the expanses of its construction. The government is blackmailing the Chairman NAB and NAB is acting as a fake Tarzan”.

“Two hours discussion prolonged with Shehbaz Sharif over the cup tea, when the opposition leader was summoned by NAB for questioning on 28th May. If such a rule remains any more, the country would be at risk. After that his arrest warrant was issued on 2nd June”, said PML(N) spokesperson. “To diffuse the opposition’s existence during budget on 12th June, the opposition leader’s arrest has been planned”.

These arguments were presented by Shahid Khaqan Abbasi, Ahsan Iqbal along with Mariam Aurangzeb, Tariq Fazal Chaudhry, and Uzma Bukhari in Model Town, Lahore while talking to media. Shahid Khaqan Abbassi said that Shehbaz Sharif was arrested by NAB and remained in custody for more than 2 months; 70 days and still NAB could not prove anything.

The time has witnessed that embezzlement of even a single penny against the person who worked 10 years as Chief Minister of Punjab could be proven. Shehbaz Sharif provided everything asked by NAB and will continue providing whatever is demanded more.

The Pakistan Muslim League (N) demanded with a full voice that there must be an open trial of Shehbaz Sharif so that the people may come to know of the facts. The leader also asked that the NAB is beyond any accountability and NAB’s job is merely insulting the people.