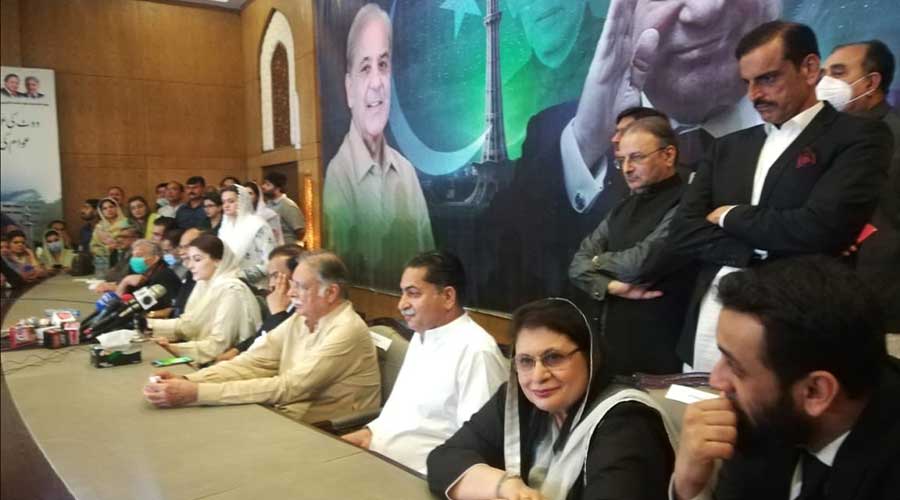 Shehbaz Sharif wanted Shahid Khaqan and Ahsan Iqbal to jointly run the party affairs in case of his arrest but after the emergency press conference by Maryam Nawaz, it now seems that Maryam will lead PML-N from here on.

After the arrest of Shehbaz Sharif, Maryam held an emergency press conference along with Ahsan Iqbal, Pervez Rasheed, Rana Sanaullah, Sardar Ayaz Sadiq, Rana Tanvir Hussain, Khurram Dastagir, Marryam Aurangzeb, and other senior party leaders. Shahid Khaqan Abbassi, Khwaja Asif, and Saad rafique were absent from the press conference. It was the general opinion in the party that along with Shahid Khaqan Abbasi and Ahsan Iqbal all senior leaders of the party should follow the aggressive strategy of Nawaz Sharif instead of the friendly policy of Shabaz Sharif.

According to the sources of Pakistan Muslim League (N), Shehbaz Sharif had instructed that in case, he was arrested, Shahid Khaqan Abbasi and Ahsan Iqbal would jointly run the party affairs. After the emergency press conference of Maryam Nawaz, it now seems that Maryam will head the party from here on.

She appreciated her uncle and said that the wife of Shehbaz has been made absconder, his son, Hamza has been sent to jail and no case so far has been proven against him. Maryam said that there is no solid reason for arresting younger Sharif. She said that if there is any semblance of justice in Pakistan, then instead if Shehbaz Sharif, Asim Salim Bajwa should have been arrested.

She called on NAB to investigate his case, further said that the credibility of NAB has already been completely eroded by the Supreme Court’s verdict in which it was said the bureau was involved in political engineering. The PML (N) vice president said that the government did a great favor to Jahangir Khan Tareen as he moved abroad scot-free.

She criticized NAB for not considering that Hamza Shabaz was 45 years old and could own his business when on the other hand, Asim Bajwa’s children were not considered dependent on him.

The press conference of Maryam has now made it clear that she will run the affairs of the party.