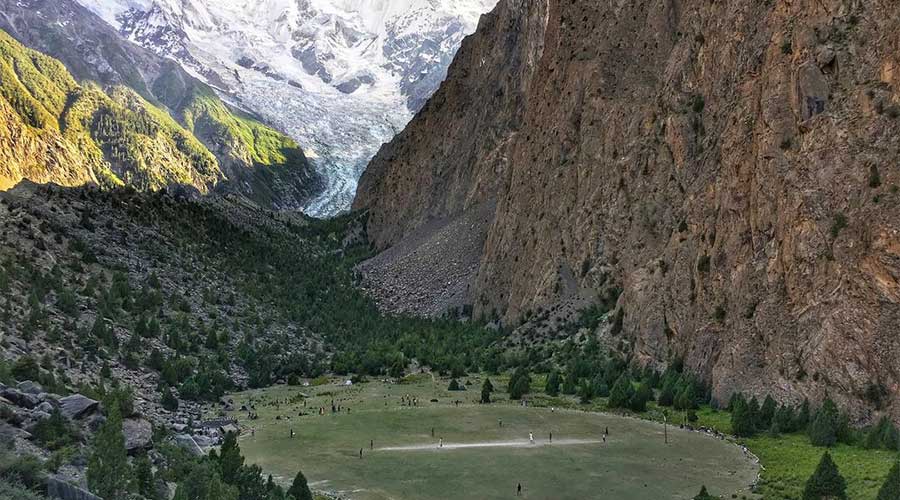 The government of Gilgit Baltistan has decided to construct a cricket stadium at Pissan surrounded by perfect natural scenery of Nagar Valley this year.

On Wednesday, after the meeting with Pakistan Cricket Board Chairperson Ehsan Mani, GB Chief Minister Khalid Khurshid Khan announced that his government is planning to construct a cricket stadium at Pissan in Nagar Valley this year.

He took to twitter and shared pictures of the ground and of his meeting with the PCB chairperson, along with the caption, “Cons of Pissan Stadium will ensure. Cricket in a highly favorable weather (temp 20°C) in peak summer when rest of the country faces scorching heat. Cricket at a place surrounded by perfect natural scenery (Rakaposhi, Glacier & Greenery).”

Cons of Pissan Stadium will ensure:-

Cricket in a highly favorable weather (temp 20°C) in peak summer when rest of the country faces scorching heat.

The decision came after beautiful pictures of the Pissan ground went viral on social media last week. As per the statement of the GB chief minister, pissan stadium construction will ensure cricket in highly favorable weather in the peak summer when the whole country will be facing extreme heat weather.

He further said that playing cricket in the GB’s stadium will give a space to play the game surrounded with the natural beauty and scenery.

After this announcement of GB Chief Minister, twitter discovered another ground with breathtaking scenery. The International Cricket Council (ICC) had shared pictures of the Gwadar stadium on its official Twitter account. It challenged the cricket fans to show a more picturesque sports venue than the Gwadar stadium.

?️ Show us a more picturesque sports venue than the Gwadar cricket stadium in Balochistan.

Now all Pakistani cricket lovers are highly enthusiastic and following the ICC challenge, they have started sharing pictures of a beautiful cricket ground in Nagar Valley of Gilgit Baltistan.