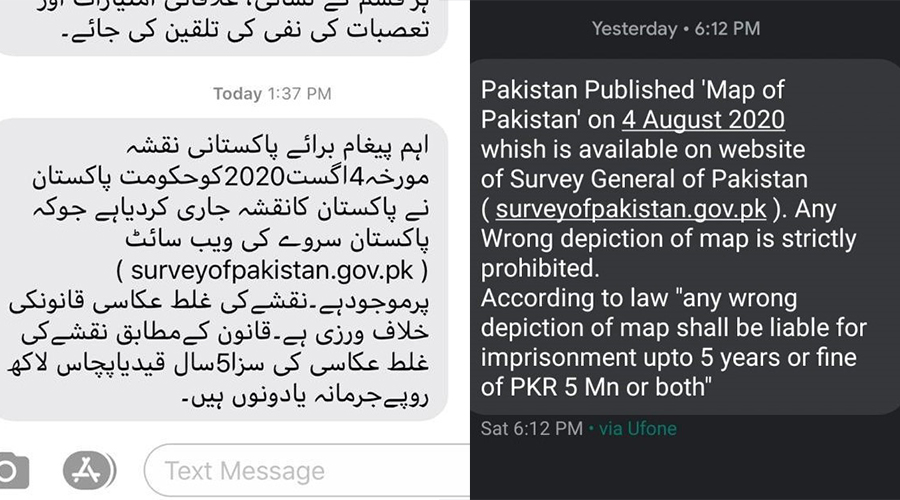 A text message is circulating across the country sent by the government of Pakistan (GoP) on Sunday, according to which a person could face a hefty fine and jail sentence of upto five years for using incorrect map of Pakistan.

As per details, the message reads: “An important announcement with regards to Pakistani map. The government has released a map of Pakistan on August 4, 2020.”

The GoP message added that the “correct representation” of the map could be accessed at Pakistan survey website surveyofpakistan.gov.pk. It proceeded to lay out the punishment in case of non-compliance and usage of incorrect representation of the map of Pakistan, which could either be five years in jail or a massive Rs 5 million fine, or even both.

On August 4, Prime Minister Imran Khan unveiled the new political map of Pakistan in which Indian Illegally Occupied Kashmir (IIOJK) was included and made part of its territory. The PM said that IIOJK was included in the territory of Pakistan and the map released will now be the official map of the country. He also said that the newly-launched map is backed by all political parties of the country.

Amendments were made in October 2020 and insertion was added to Section 20, which says any individual, firm, organization or department involved in printing, displaying, disseminating, using or circulating incorrect and unofficial versions of the map of Pakistan or any part of Pakistan in hard or digital form shall be liable to be imprisoned for a term which may extend up to five years or a fine of five million rupees or both.

Another addition was made to Section 16 that says no one shall print, display, disseminate, use or circulate incorrect and unofficial versions of the map of Pakistan or any part of Pakistan in hard or digital form. All individuals, firms, organizations or departments shall get their maps vetted and cleared from the Survey of Pakistan before use, publication, dissemination or circulation.