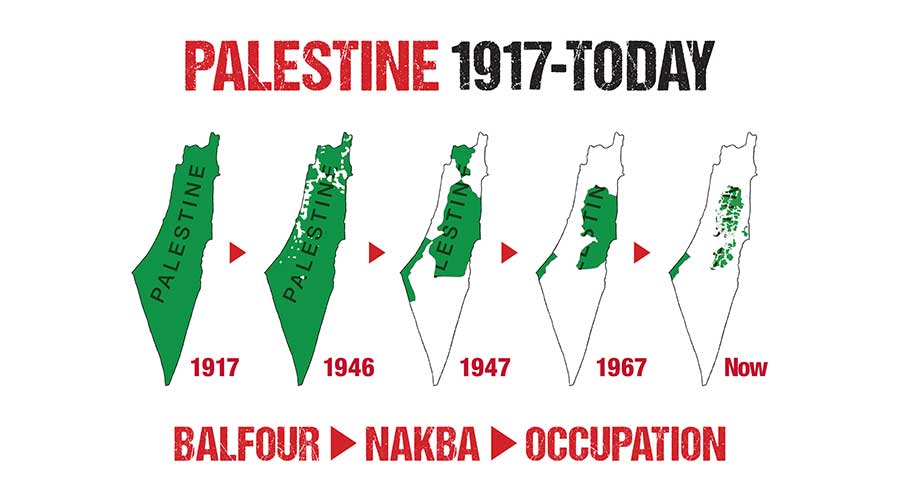 For decades Israel continued the illegal annexation of many Palestinian areas and Palestine was unable to do anything as the Zionists had the backing of Washington. Israel extended its boundaries along with installing checkpoints which kept Palestinians under tight scrutiny in their own areas.

Now different reports suggest that Prime Minister of Israel Benjamin Netanyahu is planning for another annexation in which Israel will capture the Jordan Valley along with the northern Dead Sea and aims to make it part of the Israel state.

It is a term used when a country single-handedly and unilaterally merges part of a neighboring country’s territory into its boundaries. It is forbidden in any law and international law is very clear on the matter. United Nations also does not accept any annexation or taking over any territory as it is mentioned in the charter of the United Nations.

Here is everything for you to know what happened between Palestine and Israel till today.

Palestine before the British Empire

During World War 1 (WWI) British promised Jews their separate state in British controlled Palestine and a treaty was signed named as Balfour Declaration.

The Balfour Declaration was issued on November 2, 1917. The main individuals who were behind this Declaration are
Arthur Balfour: He was the author of the Declaration and was serving as a foreign secretary in the British government.
Lionel Walter Rothschild: He was the main person of the British Jewish community and Rothschild is the one to whom the Balfour Declaration was issued.
Chaim Weizmann: The first president of Israel, a Russian Zionist, and also extended his full support as a scientist in the war era to the British.
David Lloyd George: David Lloyd was the Prime Minister at that time when the Balfour Declaration was issued. He remained Prime Minister from 1916 to1922.
Mark Sykes: he was helping the British government in making war strategy and is renowned for a linkage between British Zionists and politicians.
Herbert Samuel: He was the first Jewish cabinet minister in England and brought the idea of a separate Jewish state.
Nahum Sokolow: A polish journalist who acted in favor of the Declaration and convinced France that Palestine must come under British administration.

Before taking over Palestine from the Ottoman Empire, the Jews settled in the region were only 6% of the total population. However, after migrating from Europe to British controlled Palestine it went up to 33%. The total number of Jews immigrants from Europe to Palestine was around 376,415.

After the Adolf Hitler Nazi party came into power there was seen a rise in settlements of Jews towards the British controlled Palestine. In World War II (WW2) around 6 million European Jews were mass killed by the hands of Adolf Hitler’s Nazi Germans.

3- 1947 – UN resolution to end conflict between Israel and Palestine

4- 1948 the banishment of Palestinians

Arabs and Israel started their first war in which Jews claimed victory and seized 78 percent of the historic Palestinian area. In this war, a large number of Palestinians lost their homeland and scattered around the neighboring countries.

According to reports around 750,000 Palestinians were expelled. The remaining 22 percent of historic Palestine was divided into West Bank and Gaza Strip. Later on, in 1949 Some Arabs states and Israel made a truce and a Green Line was established which recognize the boundary between Israel and West Bank.

In 1967 another war started between Israel and Arabs and Arabs faced yet another defeat at the hands of Jews and this time Syria lost its Golan Heights and Egypt its Sinai Peninsula. More Palestinians were expelled from living in their homeland as reports revealed around 300,000 citizens had to move away from their homes.

After the intervention of Americans Egypt and Israel made a truce in which Israel took out their forces from Egyptian territory.

Israel also unilaterally annexed other territories in the past which include East Jerusalem. Israel captured this in the 1967 war but passed a law in 1980 making annexation of East Jerusalem explicit.

Between Israel and Palestinian Liberation Organization (PLO) meetings were arranged in Norway, which was the first time both parties met with each other directly that resulted in the “the Oslo I Accord”.

The agreement was signed in the US in 1993 in which the demands were made that the Israeli forces will withdraw from West Bank and Gaza and a self-governing Palestinian authority will be set up for a five-year transitional phase. Another agreement was also signed in 1995. The West Bank was divided into three zones.

Zone A: In Zone A the Palestinian Authority will be in control of activities.
Zone B: in Zone B Israel will have the right to control external security and on the other side, the Palestinian Authority will have the rights of Education, Health and Economy. This area covered 22 percent of the West Bank.
Zone C: It was a large area that consists of 60 percent of the West Bank and according to the Oslo Accord the control should be given to PA but it never happened instead Israel takes control of the area as well as diplomatic matters.

7- How big is Palestine?

The Palestinians have the remaining West Bank, Gaza Strip, and some parts of East Jerusalem which consist of 6020 km2.

After the settlement of Jews since 1917 Israel illegally captured 20,770 km2 of the historic Palestine area.
By combining the Israel and Palestine territories the sum is 26,790 km2.

About 600,000-750,000 Jews are living on the occupied West Bank and East Jerusalem.
These settlements were illegal as Israel violated the Fourth Geneva Convention which clearly forbids capturing area through power and increasing its population on the occupied territories.

The US President Donald Trump recognizes the Israel settlements in a statement in which he says “the settlements are not necessarily illegal”. The growth of settlers living in occupied West Bank and East Jerusalem keeps on increasing. These settlers granted Israeli citizenship along with other perks which enhances their lifestyle. It was recorded in 2020 that around 463,535 Jews are living in East Bank and 220,200 Jews living in East Jerusalem.

Israel is continuously improving its defensive line by constructing a wall which is 700 kilometers long. Despite following the Green Line of 1967 boundary Israel stretches its separation wall up to 85 percent in the West Bank.