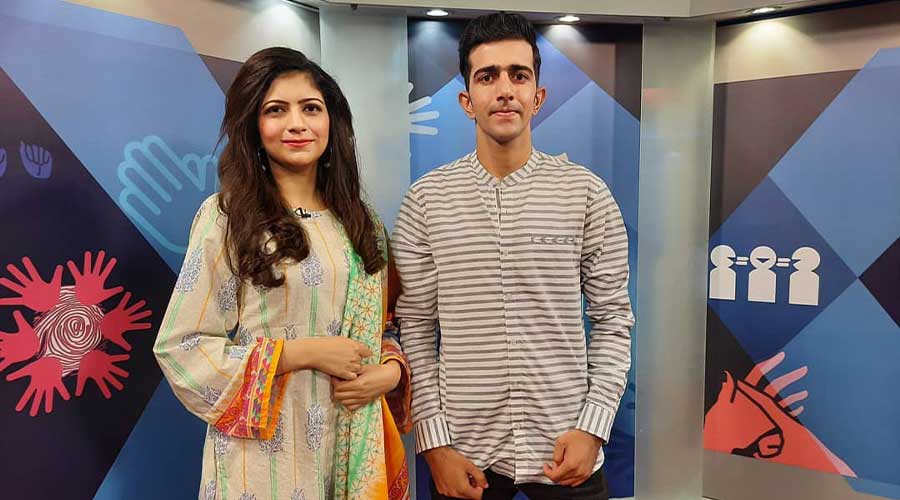 Pakistan’s first deaf vlogger Hassan Ahmed has now made his way to television with his TV show Ishaaron ki Zuban on Kay2 channel.

The brand ambassador of Deaftawk, Hassan Ahmed started making videos during the lockdown period which were featured by the federal government to restrict the spread of the coronavirus pandemic. Hassan Ahmed’s videos were to educate deaf people pertinent to the preventive measures and SOPs of COVID-19 via sign language.

Read more: YouTuber reunites Pakistani woman with her family in India after 70 years

The television program “Ishaaron ki Zuban” is co-hosted by his sister and soon to be aired on Kay2 channel of Pakistan, every Saturday at 6 p.m.

The exciting news was shared by Hassan himself with his followers on his social media account. While sharing this thrilling news on Instagram account Hassan wrote, “We hope this initiative will pave the way for deaf community to be included in mainstream media and feel heard”.

“A big shout out and million thanks to Kay2 TV family for providing us this amazing opportunity to work with them to support the deaf community and to promote deaf culture in their own language”, vlogger Hassan Ahmed said to acknowledge Kay2 channel for providing him a chance to come on television.

He then shared a short clip from the first episode before its airing writing, “Much excited for first episode of “Ishaaron ki Zuban”, is going to be streamed in few minutes, watch us sharp at 6pm on @kay2tvofficial channel.”

Much excited for first episode of “Ishaaron ki Zuban”, is going to be streamed in few minutes, watch us sharp at 6pm on @kay2tvofficial channel.

The vlogger also makes videos while ordering and buying products online. In his videos, Hassan tried to attract the followers with his humor and creativity and everybody loves and encourages Hassan for what he is doing. From entertainment gigs to food recipes, Hassan Ahmed tried to cover all the main segments of the topics.