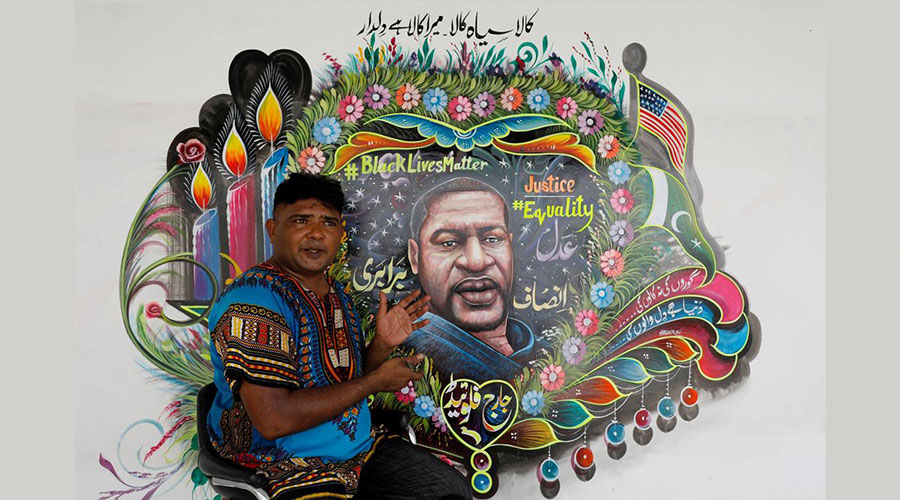 Haider Ali’s fresco proved that racism is nothing and humanity is the foremost thing to be called a human.

‘Racism is more dangerous than coronavirus’

Racism and colorism are always global hot topics and they are now in the spotlight due to the ongoing protests in the US and Europe in the wake of George Flyod’s killing. Haider Ali, an artist of truck painting painted the slain African-American George Floyd who was murdered by police officers in America. His death led Black Lives Matter protests all over the globe.

A Pakistani painter was one of them among the protesters who showed his grief and tyranny of white supremacy on Black lives via a painting of the black man with some appealing captions.

Haider Ali a traditional Pakistani truck artist painted a mural on the wall of his house in Karachi to express his solidarity with George Floyd.

Expressing solidarity with #GeorgeFloyd a Pakistani Truck Artist #HaiderAli paints a mural on the wall of his house in Karachi.

“This artwork not only pays reverence to George Floyd but it pays a tribute to everyone fighting inequality and injustice”, said Haider Ali. pic.twitter.com/3UasHDdpTL

When this truck artist was interviewed, he said, “This artwork not only pays reverence to George Floyd but it pays a tribute to everyone fighting inequality and injustice”.

The act by the truck artist has won the hearts of people. He has become famous in a day through his love for humanity.

Haider Ali the fresco maker added,  “This act of barbarism makes me think of also the Muslims living in Indian Occupied Kashmir, Palestine, Myanmar and elsewhere, what they have to go through every day? They are subjected to injustice and cruelty on the basis of religious bias, tortured and killed. They are living their lives in fear every minute. I plead that the world must raise voice for them too”.