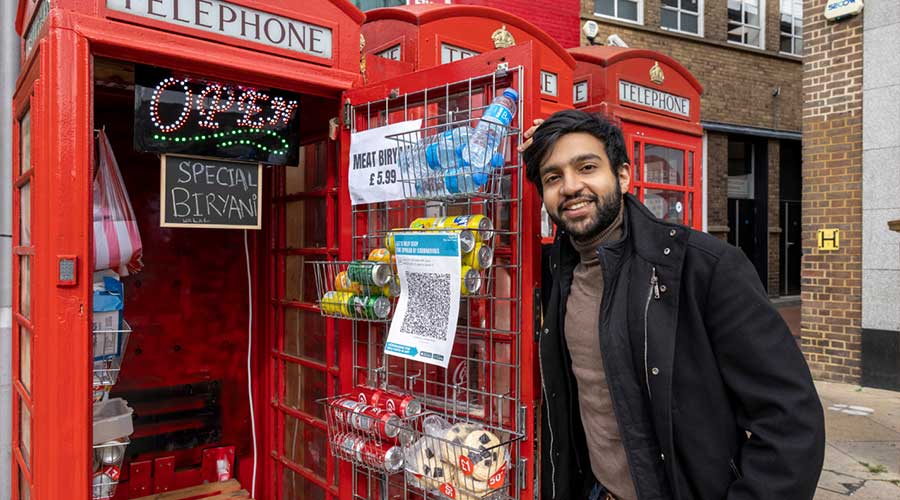 Originally from Lahore, Tayyab Shafiq came to London to study at the University College London (UCL) four years ago. He is a qualified mechanical engineer.

In his exclusive interview, he said, “As a young Pakistan Entrepreneur initiating my businesses in the UK, it saddened me that people relate to desi food with Indian cuisine, I want people here to relate to the Pakistani cuisine as much as they do with Indian food.”

The Pakistani student entrepreneur further talked about his venture of opening the ‘world’s smallest restaurants’ in abandoned phone booths that he wanted to promote the tradition of Pakistan and bring back the golden sparrow image of Pakistan in the most iconic manner.

Tayyab Shafiq has been happily posing for pictures for the English press right outside the Uxbridge Station on High Street. His business idea of aromatic biryanis has been covered in several British papers.

He added that his idea to start the unique and innovative venture had given a new life to the red telephone booths, he expressed his wish that he wanted to cater desi food and many other Pakistani dishes in the food market in his new venture.

“As there are so many Pakistanis in the UK, so I had a vision to do businesses which represents Pakistani culture in the UK and to play my role in strengthening the bond between Pakistan and the UK especially after Brexit when the UK is looking for new business partners. It is a prime opportunity to re-establish the holdings in the UK,” Tayyab said in an interview.

He said his “smallest takeaway in the world” serves chicken and lamb biryani, dal chawal, samosas, drinks and various other snacks.