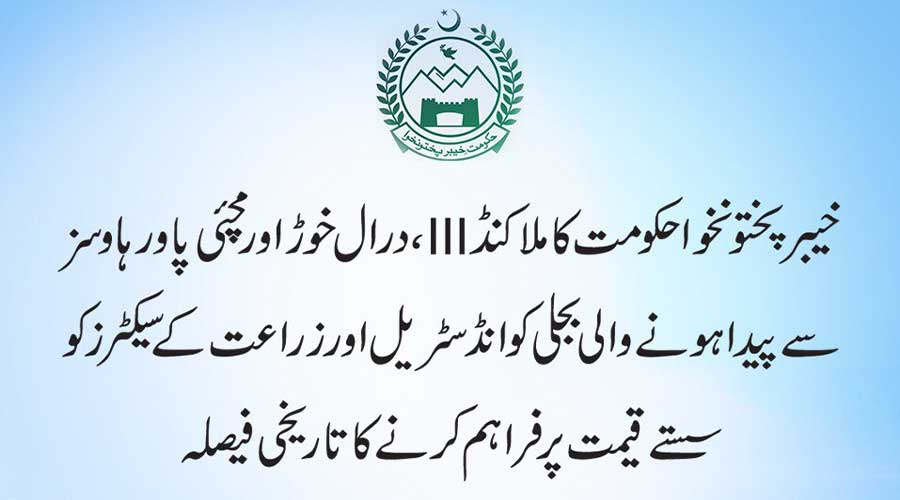 On Wednesday, the Khyber Pakhtunkhwa cabinet took a decision about the supply of cheap electricity for the local industries and agriculture sectors produced by the province’s recently-built power stations.

The decision was taken in the meeting of the cabinet with Chief Minister Mahmood Khan in the chair. The statement issued later said the Malakand-III, Daral Khwar, and Machai power stations would collectively generate 137 megawatts electricity, whose supply to agriculture and industries would bring about an industrial revolution in the province.

The cabinet was informed that the Pehur hydropower station in the Swabi model would be replicated through an open competition in that respect. Special economic zones have already been established by the provincial government in the province so that prosperity could be ensured, enhance employment opportunities, promote skill development, increase productivity, and alleviate poverty.

Apart from deciding the supply of cheap electricity for agriculture industries, the cabinet also approved the proposed KP Schools Bags Limitation Weight Act, 2019, for both public and private primary and secondary schools. The statement said violation of the Act would lead to taking strict action against the heads of public schools and fine up to Rs 200,000 for private school administrations.

The cabinet also approved the first-ever commerce and trade strategy for the 2019-2023 period which will be shared with the federal government.

According to this strategy, bazaars will be established in border areas, the business community will be given incentives and an environment of ease-to-business, the departments will be digitally interlinked, and promotional units will be set up for trade development.