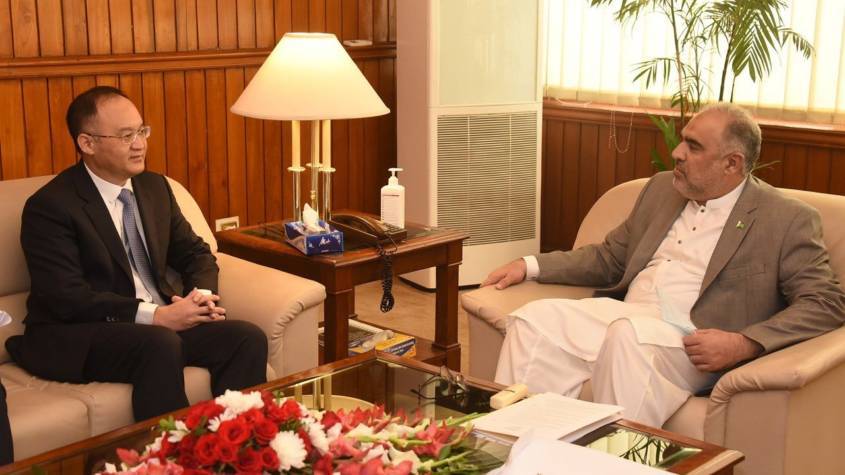 Asad Qaiser, the Speaker of the National Assembly of Pakistan during the meeting with the Ambassador of China, Nong Rong said that big goals about the economy and industry would be achieved after the completion of CPEC.

The speaker said that the friendship between Pakistan and China has been strengthening for decades. The friendship of the two countries is based upon regional development, mutual trust, trade, and economic cooperation.

Pakistan is proud of its decades-old all-weather unique friendship and strategic partnership with China and the present government is committed to taking that exemplary relation to new heights.

The speaker National Assembly agreed to the suggestion of having a virtual meeting with the Chinese National Peoples Congress on the 70th anniversary of Pakistan-China Diplomatic relations.

He said that the CPEC will change the destiny of the region. Pakistan will not only be the beneficiary of this mega project but the socio-economic impacts of the same will be on the whole region.

He further said that the whole parliament is standing with the CPEC and that is why, several seminars have been held to mobilize the stakeholders, intelligentsia, and other segments of society to enhance the effectiveness of the project.

The speaker said that the commitment of the political leadership will increase the splendor of CPEC. He emphasized the need for contact of the parliamentarians to strengthen the ties.

Talking about the Rashkai Special Economic Zone, the speaker said that it will be a milestone that will be greatly helpful to increase the economic prosperity of the country and Khyber Pakhtunkhwa will be the special beneficiary of it.

He added that along with the Parliamentary Committee on CPEC, another Special Committee had been constituted to look into the early completion of Chashma Right Bank Canal Project, Peshawar-D.I Khan Motorway, Chakdara-Chitral Road, and other projects related to CPEC.

He added by saying that the PM is fully aware of all activities in this regard and he has instructed all the quarters to extend maximum support to Parliament in realizing the objectives of CPEC.

The Ambassador said that the friendship between Pakistan and China has no match which is strengthening day by day. He said that cooperation between the two countries is proof of their strong relations.