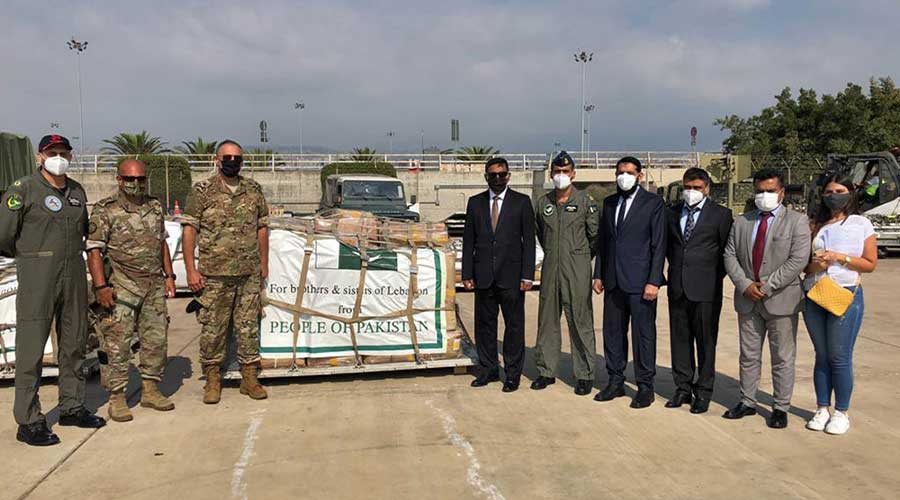 On behalf of the Government of Pakistan, Foreign Minister Shah Mahmood Qureshi expressed grief and condolence with the grieving families. To show unity with Beirut blast victims Pakistan dispatched 8 tons of aid to Lebanon. The 8 tons of relief assistance consists of medical and food supplies.

To express solidarity with the people of Lebanon, plane arrived at Beirut airport, carrying tons of medicines and food items provided by Govt of Pakistan, Amb H.E Najeeb Durrani handed over to Lebanese authorities. pic.twitter.com/qTeySpEToM

Pakistan Foreign Affairs Minister Shah Mahmood Qureshi had a talk with Lebanon’s Foreign Minister Charbel Wehbe on Friday over telephone and expressed sympathy over the death of Lebanon’s citizens in the blast that happened in Beirut.

The Foreign Miniter also added that Pakistan’s President Arif Alvi and Prime Minister of Pakistan Imran Khan already shared a moment of grief with top leadership of Lebanon over the Beirut blast.

Shah Mehmood Qureshi also appreciated the Lebanese people as they show positive spirit, Shah also added that he is very confident that Lebanese people will overcome with these difficult times as they all have strong characteristics.

The Foreign Minister of Lebanon Charbel Wehbe expressed gratefulness of the government of Pakistan and the citizens of Pakistan for their support and condolences for the Beirut blast victims in difficult times for Lebanon.

Both Foreign Ministers agreed to stay in close contact.

What is known about Beirut blast till now?

A giant blast in a warehouse took place at Beirut port around 6 pm local time on August 4, leaving at least 135 dead and thousands injured. Based on the visuals and sound, experts believe that it could possibly be of firecrackers.

The explosion was so huge that in start there were rumors that it could be detonation of some nuclear device. The blast was even felt by Cyprus which is 240 km away from Beirut.

After several hours an official statement was released by Lebanon government regarding the incident that the explosion was that of over 2,750 tons of ammonium nitrate which was seized six years ago and stored in the port near a firecracker’s depot.

At the moment it’s too early to conclude whether it was sabotage or a mere mistake, everything will be cleared when the investigation ends.