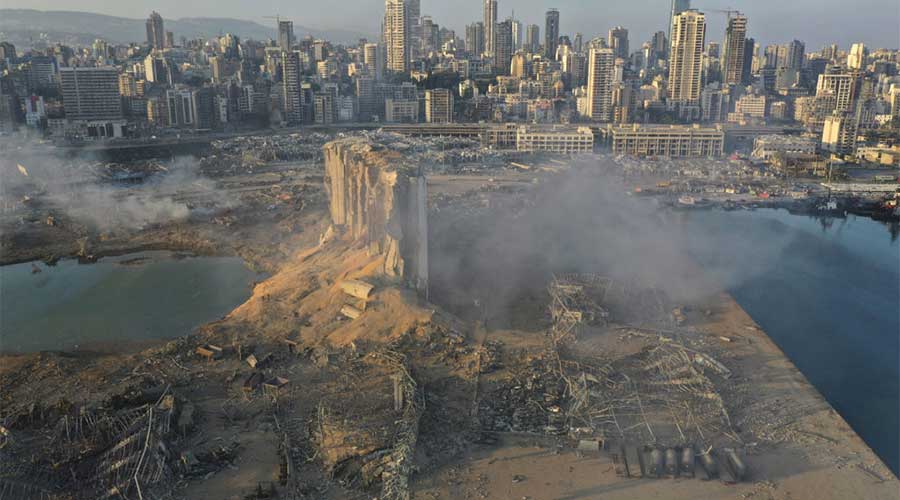 The huge catastrophic explosion on Tuesday night rocked Lebanon’s capital Beirut. The explosion in its port sent a massive blast wave into the city. According to international media, more than 100 people got killed and more than 4000 are injured in the blast. Beirut’s governor Marwan Abboud says 200,000-250,000 people have lost their homes with damages ranging from $3-5bn.

After the blast, the port city was representing a dystopian destroyed city which looked nothing short of an apocalypse. For hours lines of dark brown smoke were still in the sky, which seemed like highly toxic gas.

The country’s economy is already in a decline due to coronavirus pandemic and the blast of this scale leaves nothing but complete destruction. All the surrounding buildings from the port tumbledown and only 3 percent of the port is usable.

The sheer intensity of the blast was so catastrophic that the explosion was heard in Cyprus which is more than 200 kms away from Beirut.

The Lebanese Supreme Council recommended the state to declare the Beirut city under emergency for at least two weeks and hand over the security duties to military authorities.

Cause of the blast

The Prime Minister of Lebanon, Hassan Diab revealed that the cause of the explosion is ammonium nitrate. A 2,700 ammonium nitrate which was stored in the port blew off after fire erupted in a nearby fireworks depot.

The Prime Minister also declared one day of grief for the departed soul. Hassan Diab also expressed that he will reveal facts behind the cause of blasts.

Lebanon already dealing with corona patients as there are 5,062 corona cases, but now hospitals filled with wounded citizens, the authorities urge for blood donations and managing more power generators to keep the light on.

Pakistan Prime Minister Imran Khan has reacted to the devastating blasts in Lebanon, saying that he was deeply pained by the loss of precious lives.

Read more: The relationship of other Middle Eastern countries with Palestine and Israel

Citizens were worried whether the air is still dangerous to breathe due to blasts. The US embassy in Beirut released a statement regarding the current disaster by advising people to wear masks and remain in their houses. The American University of Beirut’s Aerosol Research Lab declared that air quality level has returned to good.

The Economy Minister of Lebanon Raoul Nehme revealed that currently we cannot use wheat which was in warehouses of the Beirut’s port so therefor the country will import wheat but as of now the country has enough wheat. The import will begin when the situation gets under control.

Lebanon suffered 15 years of civil war and also frequently caught up in the clash of regional conflicts. But the explosion on Beirut port is a calamity that brings a struggling nation to its knees.