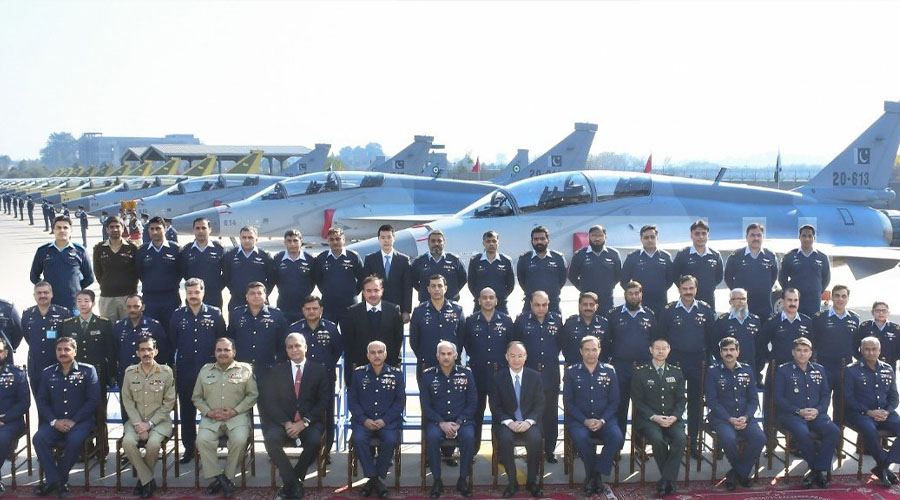 According to an official release, a ceremony for the formal induction of 14 JF-17 Thunder Block II, a dual-seat combat fighter aircraft, jointly developed by Islamabad and Beijing, was held at the Pakistan Aeronautical Complex (PAC), the PAF’s manufacturing facility in Kamra, near capital Islamabad.

The grand ceremony was organized at the Aircraft Manufacturing Factory, Kamra where Chief of the Air Staff Air Chief Marshal Mujahid Anwar Khan was the chief guest while the Chinese Ambassador to Pakistan Nong Rong and Executive Vice President of Aviation Indus­tries of China (AVIC) Hao Zhaoping had also attended the ceremony as the guests of honour, said the statement released by PAF.

He had said that JF-17 Thunder is the backbone of PAF which has been battle-proven during operation Swift Retort.

The induction of JF-17 Block II dual-seater aircraft will increase the potential for national defense and in another significant development Pakistan Air Force begins preparations for the Block 3 of JF-17 multirole fighter aircraft, Pakistan’s first 4.5 Generation fighter jet and the most advanced JF-17 variant that represents cutting-edge aerospace technology which is believed to be equivalent to that of Rafael jets.

The PAC in Kamra has so far delivered more than 100 home-made JF-17 Block I and Block II aircraft to the PAF since 2009.

The production is part of the modernization of Pakistan’s air fleet to compete with its arch-rival, the Indian Air Force, which has more than 2,000 aircrafts compared to the PAF’s current strength of over 900 aircraft and helicopters.