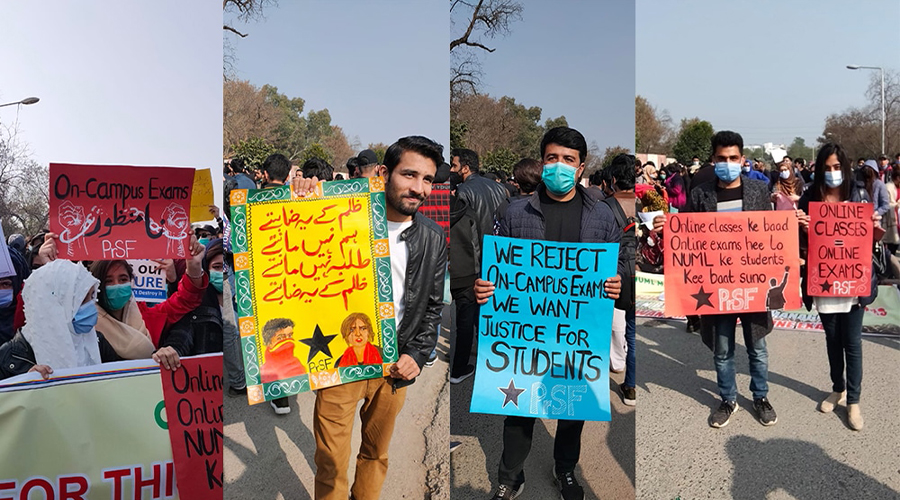 Students of the National University of Modern Languages (NUML) took to the streets on Monday and protested outside the university’s gate demanding that exams should be held online.

They opposed the university’s administration recent decision and raised the slogan, “If the classes were moved online then the university should also reimburse the semester fee.”

Earlier this week, the university management issued a notification stating that the university will hold the final exams for the Fall semester on campus after the government announced that universities across the country will reopen on February 1.

They blocked IJP Road and 9th Avenue and demanded that the exams should be held online just as the semester was studied online.

In the meantime, the administration of the university was not ready to accept students’ demands and termed them baseless. It said that the Federal government had allowed the reopening of education institutions so, exams would conduct on-campus.

The protest took so much time and a heavy contingency of Islamabad Police arrived at the protest site, the students are now insisting the demonstration would continue until the NUML administration accepts their demands, the main to not give physical exams.

NUML university students are calling this protest for the sake of justice, one of the students posted on twitter, “Placards at today’s #NUMLiansBoycott_PhysicalExams protest outside NUML in Islamabad. Students are sick & tired of being excluded from decisions about their education & their lives. #NumliansProtest For Justice #StudentsWantOnlineExams”

However, negotiations have begun between the students, varsity administration and police.

Moreover, yesterday, hundreds of students gathered outside Aiwan-i-Iqbal in Lahore and later marched towards the Governor House to protest against universities and demanded online examinations.

They were carrying placards and banners inscribed with slogans against their university administrations for conducting physical examinations.

Meanwhile, the same case happened in Taxila, Wah Cantt when hundreds of students protested outside the University of Wah and demanded online exams.