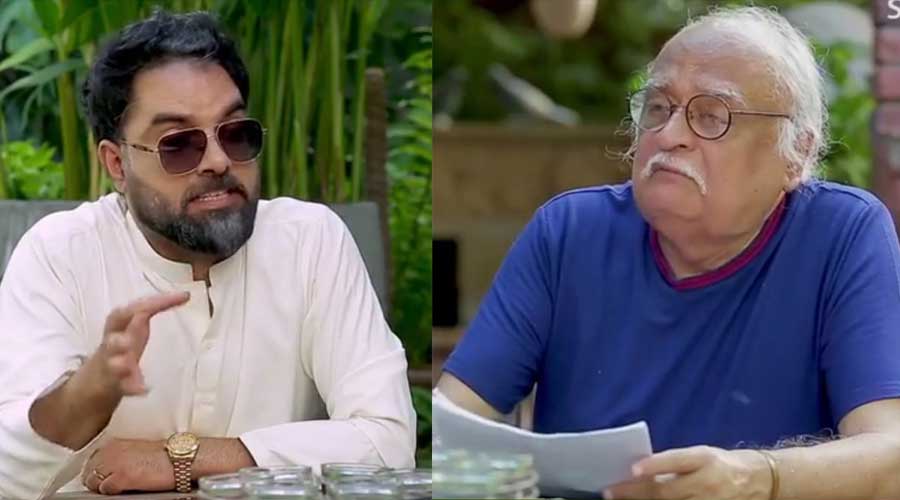 One of the most famous comedy shows of Anwar Maqsood ‘Loose Talk’ was discontinued after the death of legend Moin Akhtar but now, a similar show, titled Mere Aangan Se is being aired with Yasir Hussain taking the role of guest.

Pakistanis are just not okay with Yasir Hussain filling the shoes of legend Moin Akhtar as people consider Moin Akhtar the best comedian whose place can never be taken.

In each new episode, Akhtar gave interviews in the guise of different characters. Whatever the subject was, Moin Akhtar never failed to deliver his character and the viewers could not help but burst into laughter.

The first episode of the new Anwar Maqssod show with Yasir Hussain was recently released on YouTube and it was a commentary on how Pakistanis have no regard for the coronavirus SOPs. Hussain, clad in a white kurta shalwar, played a prestigious man who has invited 2,000 people to his daughter’s wedding.

Fans of the late legend soon responded with their backlash for Yasir Hussain as one user wrote, “The year 2020 has been bad for many and ironically, Anwar is launching a show like the popular Loose Talk in which Yasir Hussain will replace Moin Akhtar. This is an insult to the legendary actor. No one can take his place!”

One more lamented that Pakistan is not bringing out any great talent in comedy. “People who have talent in comedy are confined to the small screen and those who do not have the ability to act are coming on the big screen,” he said.

Another user went on to add, “Omar Sharif and Shakeel Afridi could have been good choices, instead of Yasir Hussain, to replace Moin Akhtar in this show as these two actors are also legends.”