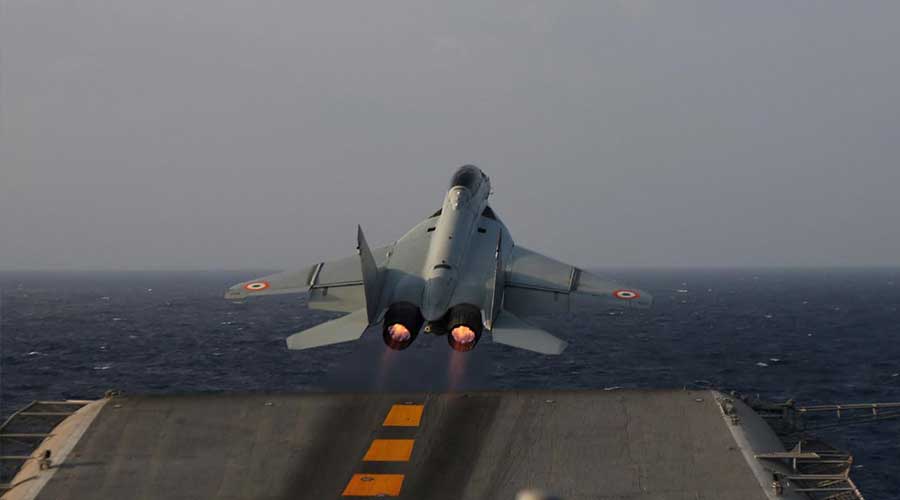 An Indian Navy trainer aircraft, MiG-29K, crashed into the Arabian Sea on Thursday evening, according to reports emerged from India.

“A MiG-29K trainer aircraft operating at sea met with an accident at about 1700 hrs on 26 November. One pilot has been recovered and search by air and surface units in progress for the second pilot. An inquiry has been ordered to investigate the incident,” said the Indian Navy in a statement.

Last year in November, a two-seater Indian MiG-29K plane was crashed after the takeoff from Goa Naval Airbase because a bird collided with the plane. However, both pilots succeeded in escaping the crash.

Meanwhile, in January 2018, a MiG-29K had also crashed as it deviated from the runway at the INS Hansa base in Goa. Meanwhile, the pilot was remained uninjured.

The same two Indian MiG-29 planes were also shot down by Pakistan Airforce on 27 February 2019 when the Indian aircrafts entered Pakistani boundaries and after several warnings the Pakistani Airforce shot down two Indian MiG-29 planes and captured one pilot named Abhinandan Varthaman. Pakistan decided to release Abhinandan on 28th February 2019 as a “gesture of peace”.

After the drastic failure, India decided to purchase Rafale fighter jets from France and made a controversial multibillion-dollar deal. The deal was estimated to be worth $9.4 billion.