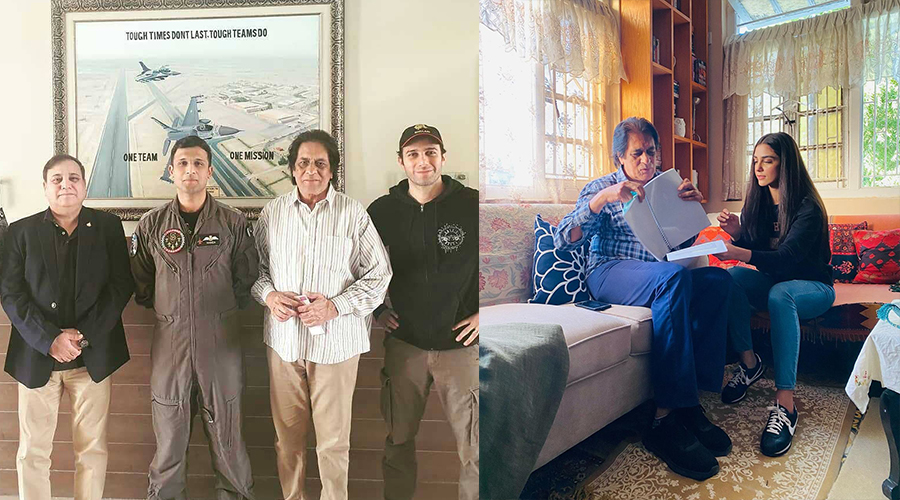 On Thursday, Maya Ali has shared a candid picture of herself with Shoaib Mansoor, marking the beginning of their venture together, ABG, with the two appearing engulfed in the project as according to the earlier announcement, renowned director Shoaib Mansoor will be working on a feature film with Maya Ali and Emmad Irfani.

Taking to Instagram, the Teefa in Trouble actor wrote, “First day on the set of #ABG, blessed to have gotten a chance to work with the great Shoaib Sahab.”

Ali’s cohorts also shipped the maven and the starlet’s affiliation. “Aaaah! Best of luck Maya! You’re working with the best,” commented Mahira Khan, who has worked with Mansoor numerous times.

At present, not much is known about the film. But it will mark the first time Irfani plays a prominent role in a feature. The Jalan actor also expressed his excitement over the prospect of working with Mansoor earlier.

Irfani said, “I’m really excited and looking forward to working with someone of the stature of Shoiab sahib (sir). To me, it is an opportunity of a lifetime as he is a colossus when it comes to modern Pakistan cinema.”

He added “Wishing Shoaib Mansoor sb all the best as he goes on floor for his next feature film ABG today,” congratulated Emmad who feels honoured for the opportunity.”

“I had the privilege of accompanying him and witnessing first hand the prestige, the honour, the commitment and the patriotism Pakistan Air Force exhibits day in day out for the safety of our great nation,” he further shared.