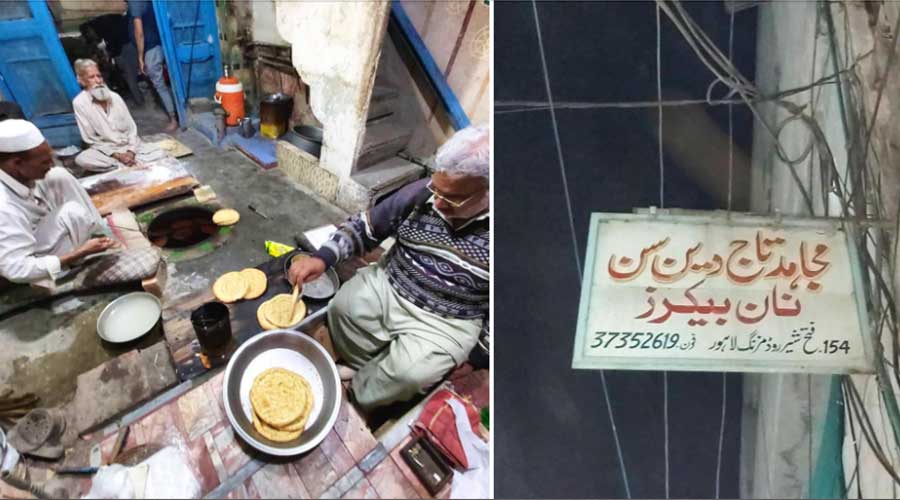 In the narrow, congested lanes of the main Mozang bazaar of Lahore, Mujahid Taj Din Naan Bakers exist. Sikandar-i-Azam, the owner of this naan shop belongs to the third generation of this family business.

The owner in his talk with Dawn says, “We have one of Pakistan’s biggest tandoors, though it may not seem so from the size of the shop.” It is named after his father Mujahid Taj Din. “My grandfather, Jalal Din, started this business in the 1850s.”

“We’re a typical Lahori family and all my forefathers and were born and bred in the Walled City.”

From the looks of it, the small, rustic shop seems to have maintained its old roots and has been through renovation only once in the 1960s.

“This property has been here [in the family] from the time of Queen Victoria,” Sikandar says. “The ceiling of the original shop was made of wood and brick but it was reconstructed in 1964.”

“Dada jee was a trader,” Sikandar said. “He used to purchase wheat and sell in the market. Later, he started selling daal [pulses], roti and kulcha [flatbreads]. At that time, five kulchas would cost two aanas, and five naans four aanas,” the owner of Mujahid Taj Din Naan Bakers says while lacing ghee on naan and handing it to a customer.

“My father really wanted to expand and modernise the business and introduce new items in order to make a mark. That’s when he came up with the qeema naan. It was sold for 12 aanas a piece.”

However, his business has now flourished. “The secret lies in our recipes for the khameer [yeast] and the masala for stuffed naans that my father developed,” Sikandar explains.

“The recipes haven’t changed ever since, which is why people come from afar, and some old customers even return after decades, only for our naans, acknowledging that the quality is the same.”

“Even if our customers have shifted to far-off localities, they still come to the shop or they call us up to place their order,” said Sikandar.