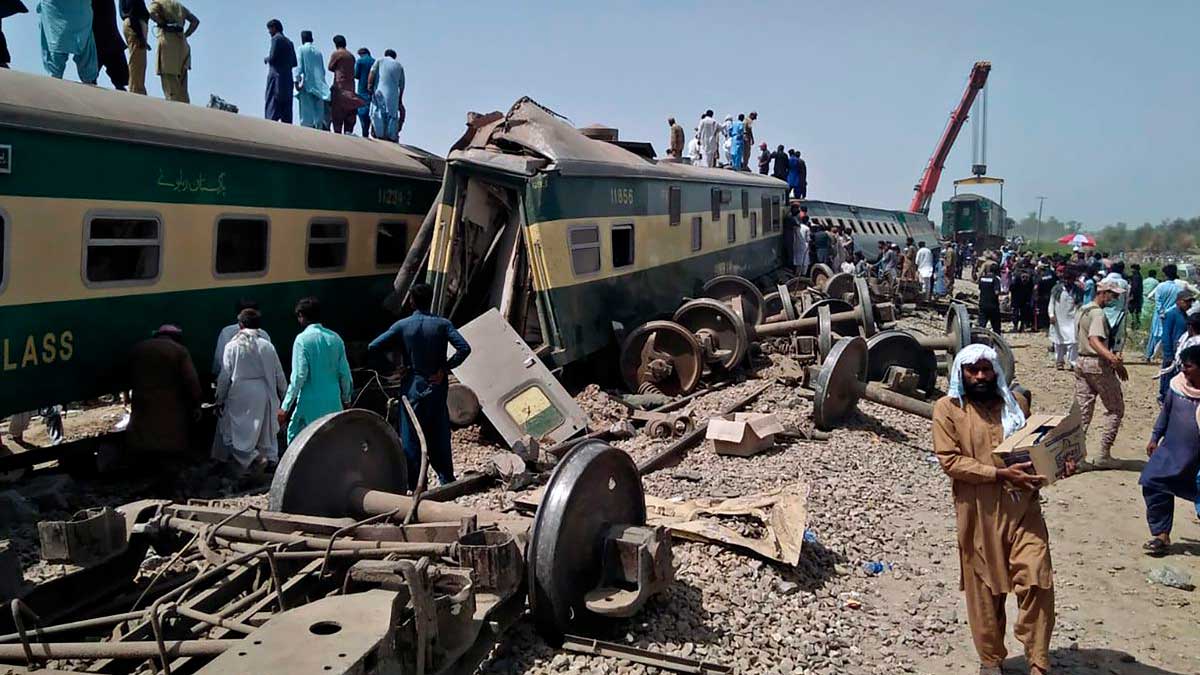 When it comes to rail accidents, Pakistan has a dreadful track record. The country has had a series of tragic train accidents in the last decade, and they appear to have risen in frequency in recent years.

Two express trains crashed in Ghotki, Sindh, yesterday, killing at least 32 passengers and injuring 64 others. The Millat Express train derailed, and the Sir Syed Express train collided with it shortly after, according to railway officials. The crash occurred between the Raiti and Obaro railway stations.

Glancing at Pakistan Railways track record over the last five years, it appears that fatalities have become more common since 2018. The following is a list of the notable railway accidents that occurred during that time period.

At least 19 persons were died when a train collided with a passenger bus near Rohri, Sindh, on February 28, 2020.

More than 70 passengers were killed in a catastrophic explosion on a moving train on October 31, 2019, which officials ultimately blamed on a short-circuit fire. The tragedy occurred in the Punjab town of Rahim Yar Khan.

A Quetta-bound railway collided with a cargo train in Sadiqabad, Punjab, on July 11, 2019, killing 24 people and injured over 100 others. The disaster was eventually determined to be the result of a delay in train track changeover.

Three passengers were killed when a passenger train collided with a stalled cargo train near Hyderabad on June 20, 2019.

On December 18, 2018, a passenger train collided with a school vehicle near Narowal, Punjab, injuring 12 children. According to witnesses, the accident occurred owing to strong fog and an open crossing gate.

A Peshawar-bound train derailed at Sehwan, Sindh, on September 27, 2018, causing 11 bogies to topple.

Nine bogies of the Peshawar-bound Khushal Khan Khattak Express from Karachi derailed near Attock on September 16, 2018. A total of 20 passengers were hurt.

Twenty-three bogies of a Karachi-bound freight train derailed in Sukkur on June 9, 2018.

On March 28, 2017, a passenger train going for Karachi collided with an oil tanker, resulting in a massive explosion that killed at least two persons and injured ten others.

In Lodhran, on January 6, 2017, a motorcycle-rickshaw crashed with the Hazara Express, killing eight people, including six school children and the driver.

On September 15, 2016, the Karachi-bound Awam Express collided with a freight train near Multan, killing at least six passengers and injuring over 150 others.

On July 2, 2015, three carriages of a special railway collapsed into a canal and another passenger train derailed near Gujranwala, killing at least 20 people.

On November 17, 2015, the Jaffar Express derailed near the Balochistan town of “Aab-e-Gum.” The last of the major train accidents claimed the lives of around 20 persons.