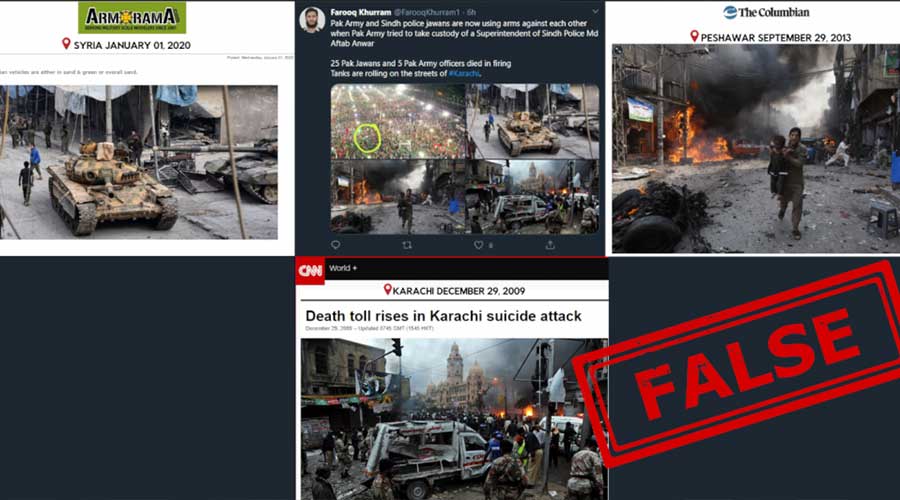 Shireen Mazari, the Federal Minister for Human Rights tweeted that “unfortunate that @TwitterSupport [is deliberately] ignoring” the fake news being circulated.

While quoting the digital rights activist and lawyer, Nighat Dad, who called out Indian advocate Prashant Patel on his absurd claims and who started the whole ‘Karachi civil war’ falsehood with “10 Police officers of Sindh Police [were] martyred during their line of duty of saving people of Karachi” and that the “US Navy many enter in Karachi port soon”.

However, Ali Haider Zaidi, the Maritime Affairs Minister held Pakistan Democratic Movement (PDM) responsible and said “the Indian media propaganda is at its peak and this is only due to PDM event”.

Indian media propaganda at its peak & sadly fueled by the PDM circus.
Both social & economic indicators of Pakistan are showing positive signs.
The artificially manufactured food inflation is being brought under control as well.
Pakistan on the rise under PM @ImranKhanPTI

Senator Sherry Rehman explained the term “democracy is never one person or view; that when freedoms are curtailed people push back; that when constitutional rights are under threat, the brave speak out”.

Pakistan’s internal dissent is a sign of its political health: that democracy is never one person or view; that when freedoms are curtailed people push back;that when constitutional rights r under threat the brave speak out. Indian trolls need to get a life and look to their own https://t.co/GgQght0ZqN

Yesterday, the Indian media started campaigning against Pakistan’s biggest port city and falsely created an entire flimsy civil war which had everything a good action must contain like guns and bombing involvement among forces in a made-up area in Karachi named as “Gulshan-e-Bagh”.

The media group who participated in this propaganda included India Today, Zee News English, CNN News18, and India.com. All of the media groups have verified Twitter accounts claimed that armed clashes had started in Karachi.