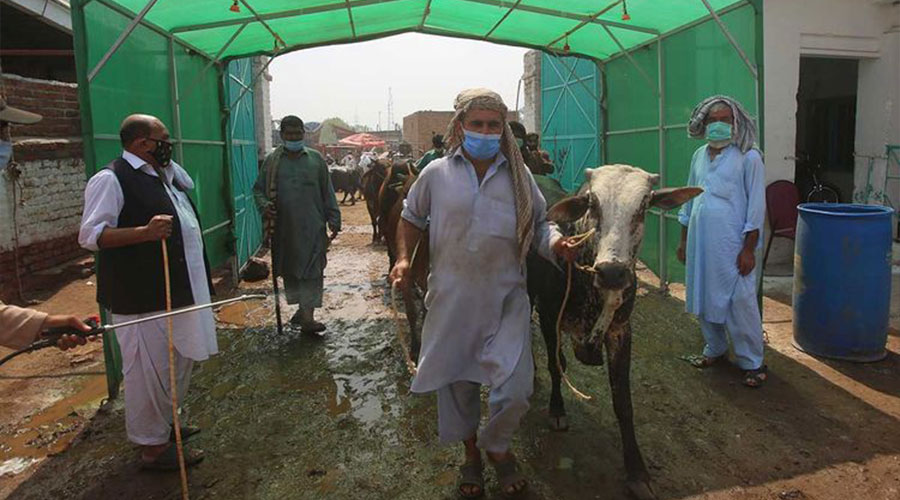 SOPs are issued for the cattle markets opened for Eid-ul-Azha in Islamabad city to prevent the spread of communicable diseases.

Congo virus and coronavirus will be checked with the newly issued SOPs. The SOPs will be applied in the cattle markets that are to be established for Eid-ul-Azha in the capital.

Food services and eateries would not be permitted on the premises of the cattle market as officials said everything would be carried under SOPs.

Sanitization tunnels would be established to disinfect visitors in the markets and children and senior citizens would also be not permitted to enter the market.

As old elders and children would not be allowed in cattle markets, people with some respiratory issues or fever are also suggested to avoid visiting the cattle markets.

SOPs for cattle markets will prevent the virus spread

Cattle trading and transportation are a permanent feature during Eidul Azha which generates a significant economic boost for the country.

As per the SOPs for cattle markets, all markets would be established at designated points and will be established 2-5 km away from the city limits. As per the recommendation, the number of cattle market will also be increased most probably so that crowd and gathering can be avoided by traders and buyers.

Cattle will be kept at an appropriate distance from customers to avoiding mixing and gatherings.

There should be functional toilets and a handwashing facility with essentially required supplies, including soap, tissues, and paper towels. Masks are mandatory for everyone, no handshake will be allowed and thermal scanning will be available at every entry point.

Read about markets getting sealed in Rawalpindi for SOPs violations here