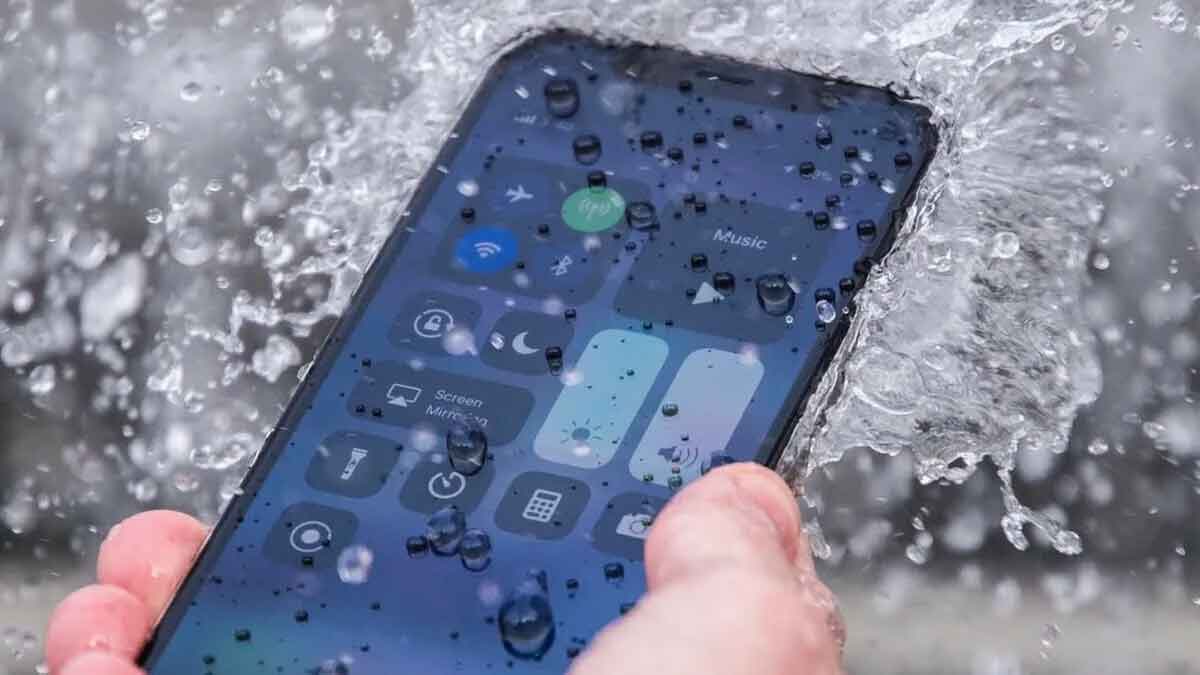 According to a patent Apple has obtained, the iPhone would be useful for usage in the rain and underwater. Despite the water-resistant design of the most recent iPhone models, using an iPhone in the rain is not that simple. Users may find it challenging to type or navigate between different areas of the screen due to the water droplets on the display.

Apple appears to be working on features, such as a wet mode, to solve these problems. Future iPhone models could have environmental changes detected so that the tech company can modify touch sensitivity.

According to a patent issued by the United States Patent and Trademark Office (USPTO), Apple intends to tweak the iPhone so that it can continue to function during “a moisture exposure event,” such as rain. It would detect water using the built-in pressure and moisture sensors and modify the software as necessary.

In the event of light rain, the software might modify the on-screen buttons to lessen the likelihood of receiving inadvertent touch inputs. Apple might also modify the pressure sensitivity of the iPhone’s display so that it only registers touch inputs that are applied with a specific degree of force. This would lessen the likelihood of incorrect inputs being picked up by raindrops.

Read more: Apple Watch Series 8 will be able to detect if you have a fever

The patent filing states, “The electronic device can include a moisture detector capable of identifying an amount of moisture present at the protective cover, wherein the processor determines a position of the touch event based on detection signals provided by the capacitance detector and the applied force detector when the amount of moisture is greater than a threshold amount.”

The document also makes the suggestion that there may be several configuration options for touch reactions, including wet, dry, and underwater.

Based on whether the user’s finger is dry or wet, the iPhone’s wet and dry modes may cause the force input detection to change and accept touch inputs. However, according to the patent description, the underwater mode can allow the iPhone to change the interface and make it easier to operate underwater.

When the iPhone is submerged underwater, the underwater setting can effectively be used for taking pictures and recording videos. According to the patent application, it might also modify characteristics such as white balance settings, ISO sensitivity, clarity of the camera unit, and display brightness.

The listing on the USPTO website for the proposed upgrades also includes some illustrations that show how the changes would function.

Apple hasn’t formally promoted any of its iPhone models for underwater photography as of yet. Additionally, the guarantee has not yet addressed liquid damage. If we are to believe the specifics of the patent filing, there may be some adjustments on all of these fronts.

The IP68-rated construction of the iPhone 13 and iPhone 12 models in the range is intended to provide some water resistance. Apple provided an IP67-certified body on earlier versions, such as the iPhone 8 and iPhone 7.

In March 2021, Apple submitted a patent for creating an iPhone that can function in the rain. However, the application was approved by the authority in June of this year.

Companies typically submit patent applications for a variety of technology that they intend to apply in upcoming products. The patented technologies, however, are occasionally only intended for prototyping. Therefore, it is prudent to approach the speculative claims made in support of the patent application with a fair dose of scepticism.