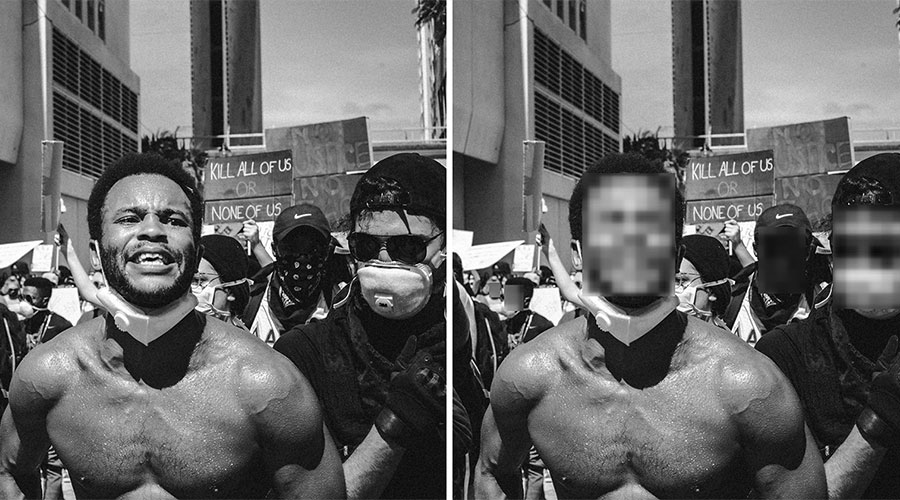 While showing up at a protest, you may want to hide faces in a photograph, especially when there is a chance that authorities will use that information.

At the moment the world is facing pandemic coronavirus along with protests and rallies proclaiming Black Lives Matter. The protests started right after the death of an African American George Floyd by police officer Derek Chauvin along with three other fellow police officers.

During the protest, tens of thousands of citizens gathered to show solidarity with the grieving family. Showing up for the protest means you raise your opinion regarding a certain act that does not mean you want to expose yourself to the authorities through pictures. Because they will use those pictures to identify protestors and later track them down. So it’s better to blur your face or anything else to get invisible before sharing it on social media services.

You can remove facial features from pictures through numerous software such as Photoshop but software requires a laptop and during the protest, you are not carrying it with you, so your mobile can work in this situation.

Only blurring your face does not guarantee you that you are on the safe side because through the neural network it can be undone. Though during the process it may lose some data the picture will remain visible to verify the person. In order to protect yourself just paint over the picture or use mosaic blur functionality and it will help to stop the option of reverting the result.

Apart from the face, you must remove all the metadata from your image which includes your phone type, location and time mentioned on the image.

There are plenty of applications that you can use to paint or blur your face, but it’s better to use the built-in function provided by Apple and Samsung.

To avoid metadata all you have to do is open the picture and take a screenshot, it’s the easiest way of avoiding metadata. The same method will be applicable in order to share the video. Just record the original video through a screen recorder and make it public. For Android users, AZR Screen Recorder is the best option.

There are plenty of iOS and Android apps that can be useful to hide faces when you protest by blurring faces such as Signal, Image Scrubber, Glitche (iOS), Glitch Lab (Android), Trigraphy, Halide, and Snapseed.