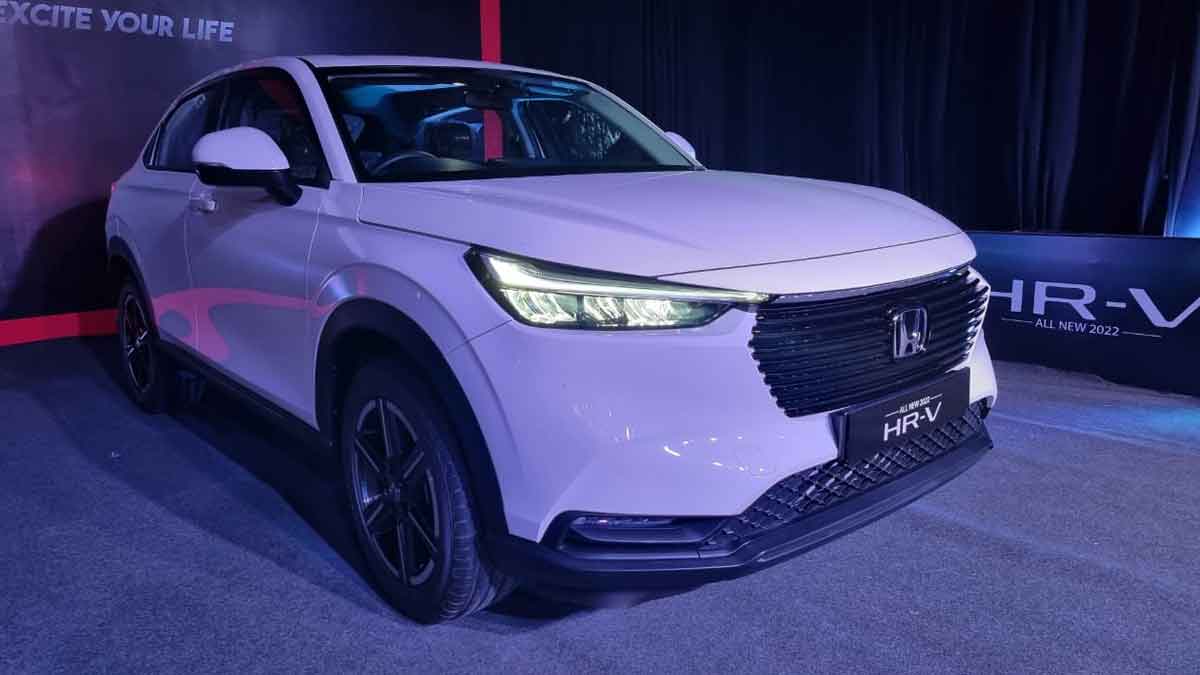 With the official release of the brand-new HR-V in Pakistan by Honda Atlas Cars Limited (HACL), the compact crossover SUV market has grown a little more interesting.

Due to the fact that it is the most recent model, the HR-V dominates its main rivals, the generationally old Hyundai Tucson and Kia Sportage.

The style of the HR-V is significantly simpler than that of its predecessor, which is a good thing.

The big front grille is body-colored, and the headlights are streamlined, giving the front end a dignified yet striking appearance. The intimidating appearance is furthered by the sharp Daytime Running Lights (DRLs). The straightened-out and lengthened bonnet shape enables a stylish appearance.

The side profile has straight, clean lines. The 17′′ alloy rims that the HR-V receives in Pakistan are an improvement over the previous model.

The back end is equally straightforward but futuristic. The understated appearance is made possible by the LED lights, the tailgate’s forward tilt, and the center trim below.

Honda made significant interior changes to the HR-V. The interior has a high-end appearance thanks to the clean dashboard design, silver trim pieces scattered around the cabin, and ambient lighting.

It boasts a sizable infotainment screen positioned on the top that supports Android Auto and Apple Carplay. While the higher variants have leatherette upholstery, the base variant is covered in soft fabric.

The new HR-V has more space because it is bigger than the previous model. Overall, it has respectable interior features and usefulness.

Here is what we know about HR-V’s proportions:

As of now, there are two variants of HR-V available. With a CVT automatic transmission, the naturally aspirated 1.5-liter four-cylinder petrol engine in both variants delivers 121 horsepower (hp) and 145 Newton-meters (Nm) of torque to the front wheels only.

It has torsion bar coil springs in the back and McPherson struts up front. In order to provide adequate stopping power, it is also equipped with disc brakes on all four wheels that have the Anti-lock Braking System (ABS), Electronic Brakeforce Distribution (EBD), and Brake Assist (BA) technologies.

The HR-V has a fuel efficiency rating of 13 liters per kilometer, according to a number of international forums, however the numbers may fluctuate in Pakistan due to roads and other conditions.

The new HR-V is loaded with modern features including:

Contrary to HACL’s custom, the HR-V variants’ costs are rather competitive, giving it a modest advantage over its rivals. The following are the HR-V prices:

Both models have a booking price of Rs. 13 lacs, but delivery status may change depending on when a booking is made.

According to company’s representatives, if you order the automobile today, you will receive it in November 2022. The automobile will be delivered in December 2022 if you reserve it at the end of this month. And if you book a car at the Honda dealership in the coming month or later, you’ll receive it in January 2023.